State of the Environment Report 2021 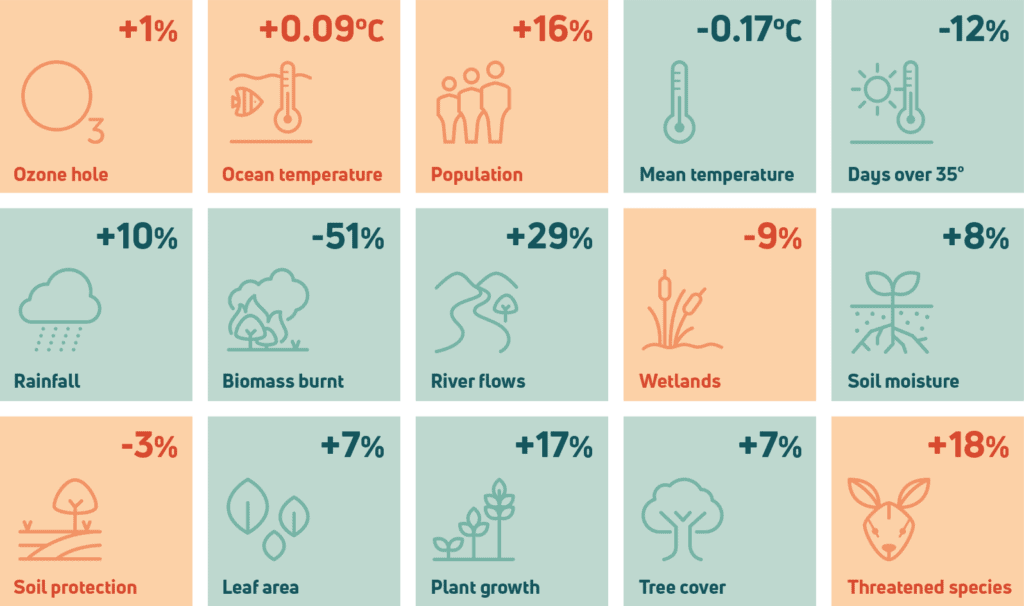 Indicators of Australia’s environment in 2021 compared with the average for 2000-2020. (Credit: http://www.ausenv.online)

The State of the Environment Report is a five-yearly comprehensive national assessment of the state of the Australian environment, written by independent experts.

The latest one has been described as "grim", "sobering" and "shocking" - though most of us aren't particularly shocked to learn that the state of our environment is "poor" and getting worse.

You can read the full report here, or watch Environment Minister Tanya Plibersek's National Press Club address here. There has been plenty of great content to help wrap your head around it, like this article from The Conversation and this this summary from the Australian Conservation Foundation.

There is, sadly, less good news in this report than previous ones, but here are some of the more positive points:

What About New Coal Mines?

When asked if this report would empower the Federal Government to rule out approvals for new coal mines (watch from 1:00:37), the Minister replied with the following statements:

As a major exporter of coal, Australia is uniquely placed to have a significant impact on global greenhouse gas emissions. These statements demonstrate a concerning lack of ambition for real and meaningful action to address climate change, beyond reducing our domestic emissions.

So, what do we do now? Below are some ideas for supporting action on this report...

This report provides plenty of reasons for despair, but there is some good news and reason for optimism that the Australian Government is under more pressure than ever to protect nature.