Paperbark is a monthly communique of current NQCC activities, campaigns, news and events.

In this October 2015 edition of Paperbark, welcome to our new-look e-newsletter & website. To subscribe to receive NQCC's newsletter and optionally other communications from NQCC click here.

NQCC is updating its ‘outreach capability’, with the adoption of the Nationbuilder software system. This is involving changes to our website. Thank you again to Malcolm Tattersall for his ongoing support with our website especially during the website restructuring phase.

Nationbuilder will help us engage with our members and supporters and, importantly, help members and supporters participate in our campaigns and activities. New functionalities include the ability for you to change and update your email preferences, nominate to volunteer in a particular way (a quick thank you at this point to our volunteers, your help really expands our effectiveness), become a member (coming soon), make a donation, buy merchandise, RSVP and buy tickets online to our events - all within our own secure site.

We encourage you to have a look around the NQCC website and in particular sign-up to receive e-updates from NQCC.

Saturday 24 October: Music for the Reef 2015 – An enchanting evening at the newly refurbished Drill Hall Gallery + Studio (North Ward). Featuring Aquapella World Music Choir, the gallery itself and a Preview of the recycled and up-cycled 'Patina' exhibition. An enchanting evening you won’t want to miss.

Saturday 28 November: Townsville's Global Climate Change March – Show your support and takebecome involved with this massive day of global action calling on leaders globally to take action on climate change. North Queensland Conservation Council will be coordinating the Townsville event and extends an open invitation to individuals, community groups, businesses and schools to become involved. For further info and an optional link to RSVP click here. 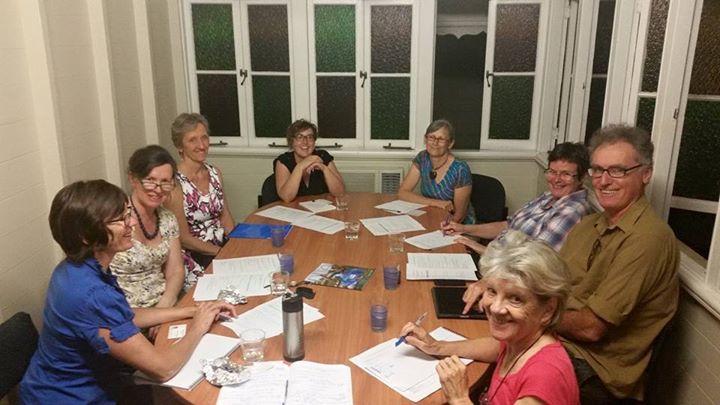 Our Annual General Meeting was held on 2 September. The substantial achievements of the last financial year were reported and the new management committee appointed. We would particularly like to acknowledge the contribution of outgoing management team members: Adam Connell, Peter Jones and Maxine Newlands. The North Queensland Conservation Council management committee for 2015/16 is: Gail Hamilton (President), Sue Cole (Vice President), Orlanda Endicott (Treasurer), and ‘Ordinary’ Members Dominique Thiriet (Membership), George Hirst and Frances Nelligan. As the sharp-eyed will have noticed, we are missing a Secretary (this position is in the process of being filled), a second VP and one ‘Ordinary' member. If you are interested in helping out by talking on any of those positions, please contact us.

NQCC will be appearing in the Land Court of Queensland in Brisbane from Monday 19 October in relation to the approval by the State government of a mining lease (ML) and environmental authority (EA) for Hancock Galilee Pty Ltd’s Kevin’s Corner coal mine project. The proposed mine, in the Galilee Basin, would produce 30 million tonnes of coal annually over a 30 year life – yet another mega mine that would be one of the largest coal mining projects in Australia.

The NQCC case is that the Cumulative Impact Assessment undertaken for the project is not sufficient to enable robust and thorough assessment of the cumulative impacts associated with the project, needed for the government’s decision.

Cumulative impact assessments are intended to identify the full direct, indirect and combined impacts, including those from interactions between impacts of the project. In lay language, CIAs are intended to prevent ‘death by a thousand cuts’ or ‘creeping normality’, and are based on the reality that the whole is more than the sum of the parts.

The case will be held in the Land Court in Brisbane and is scheduled to run for two weeks. Other respondents are focusing on the issues of groundwater and the economics of the Project. Since the first directions hearing was held on 20 December 2013, a number of further directions hearings have been held and various orders made by the Court.

Media from the first day of hearings can be found here.

Thank you to all those who made a submission or contacted a politician to argue strongly against the idea that environmental organisations (such as NQCC) should lose their ability to offer tax-deductibility for donations over $2 or be excluded (along with just about everyone else in the community) from challenging government environmental decision in Court. The respective juries (as in the committee of parliamentarians) are still out on both of these issues, but we understand that those wanting to push the proposals through are finding robust opposition – both in terms of argument and community views.

On 15 October, two representatives from NQCC participated in a well attended, 1-day collaborative workshop coordinated by the Renewable Reef Futures team from the Centre for Sustainability Leadership. The aim of the workshop was to identify, prioritise and catalyse high potential opportunities for renewable energy projects along the Great Barrier Reef. Watch this space!

NQCC hosted a stall at the Celebrate the Reef community event at Jezzine Barracks on 17 October. The stall was an outreach activity for NQCC. The stall showed the well received Kittens for the Reef youtube clip and handed out materials supporting individuals to take divestment actions with their banks and superannuation. It’s a highly effective action that you can take too. JCU student group, ActNow’s #JCUDivest campaign was promoted, as was the upcoming Townsville Climate March (28 November).

Just in... Good news for protection of dugong, snubfin dolphins and turtles

Update on Adani's Carmichael Mine

The biggest coalmine in Australia, Adani’s Carmichael mine in the Galilee Basin south west of Townsville, has again been approved by Federal Minister for the Environment Greg Hunt.

While claiming ‘the strongest conditions in history’ for the project, close examination reveals that the conditions actually diminish government oversight of the project. Adani will be able to change plans and strategies (yet to be developed) for the project, simply by notifying the Department. This condition specifically allows them to avoid a section of the Act requiring them to obtain Ministerial approval for amendments to plans.

But funding support for the financially strapped mine from either the Federal or State government seems unlikely. Federal Minister Josh Frydenberg has repeatedly said that Adani must stand on its own two feet and is ‘not a high priority’ for a concessional loan from the Federal government’s $5b ‘Northern Australia Infrastructure Facility.

With Australian and inter national banks now walking away from the project in droves, that could be some distance away.

Christmas is coming…and the World Vision Pop-Up shop is already here. Consider them for any gifts you may need to purchase.

Please remember, if you haven’t already, to take one minute to update your email preferences. We love communicating with you by email. Choosing your preferences helps us to only send you information that is of interest to you.

Wendy, Sandy and the team at NQCC