New data coming from updated monitoring equipment at the Townsville waterfront appears to confirm long-held community concern about heavy metal pollution being carried in dust emanating from the state-owned Port of Townsville. As long ago as 2010 a Queensland Government report concluded that:

While compliance with EPP (Air) objectives was maintained at all times, the monitoring program identified that dust emissions from Townsville Port activities did contribute to ambient levels of Total Suspended Particles [TSP], lead, copper, zinc, arsenic and cadmium, and to lead deposition, at the closest monitoring site, Coast Guard. Measurable contributions of these pollutants from Townsville Port activities at monitoring sites located further from the Port were only observed for lead.

Queensland Health has concluded that the total exposure to lead from inhalation and ingestion of dust in the residential community areas near the Townsville Port is highly unlikely to be associated with any known adverse health effects.

A report commissioned by NQCC in 2014 from Professor Mark Taylor, an environmental scientist from Macquarie University, adopted a different approach, measuring heavy metal contamination on surfaces in play areas and parks downwind from the port. Amongst a string of conclusions, the Taylor report found that:

In terms of the surface dust metal loading measures collected on a daily basis from the six sites across inner Townsville, the data shows that lead and nickel are the elements that most commonly exceed relevant standards.

Whilst some in the industry were questioning aspects of the study, Professor Taylor’s report was being peer-reviewed and has since been published in the journal Science of the Total Environment (515-516 (2015) 143-152). It now appears that what Taylor was saying two years ago has been validated by new data from the upgraded government measuring equipment installed at the Coastguard monitoring site adjacent to the port.

Under the auspices of the Port Stakeholders Working Group (PSWG, established by the Port of Townsville in early 2015 to bring together port users, relevant State departments, community members and NQCC) various aspects of port operations were brought together in an internet-accessible form – the Port Operations Data Dashboard. It is now providing unparalleled access to live air quality readings from the XACT Monitor at the CoastGuard plus monthly data graphs from three suburban monitoring sites showing general total dust levels, lead in dust levels and general dust deposition levels. This new, incontrovertible data combined with shipping information (vessel type, commodity, date, berth visited) and climatic data from the Bureau of Meteorology can now be compared in real time on the Dashboard to provide accurate assessment of what is happening at the Port. Data provided by the Department of Science, Information Technology and Innovation, which manages the XACT instrumentation, have been used by the industry regulator, the Department of Environment and Heritage Protection, to produce the graphical display below. 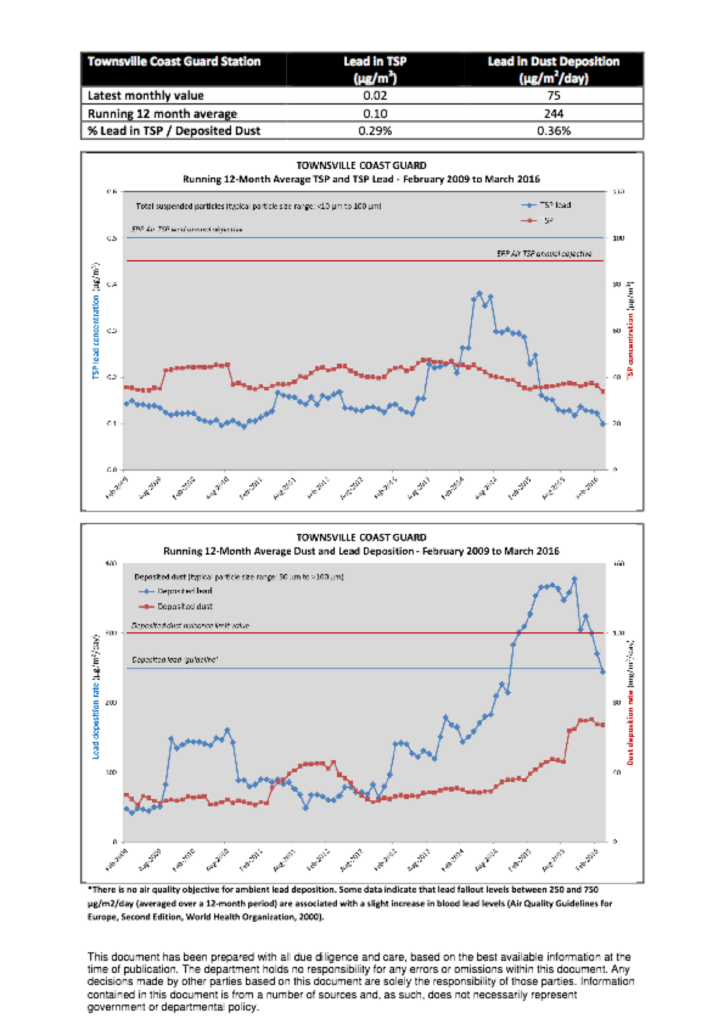 Click here to open the graph in a new window.

This historical perspective shows that major changes in lead-in-dust pollution have been occurring over the past seven years and were particularly evident (if only we had known!) at the time of the Taylor report in 2014. The first graph refers to lead and dust in air (particles per cubic metre) and the second refers to lead and dust deposition on surfaces (micrograms per square metre). As can be seen from the second graph, lead deposition levels rose alarmingly between August 2012 and August 2015, exceeding the vaguely written guidelines of the era. The Port of Townsville has been unable to explain what was going on over that period, let alone explain the sudden drop in lead emissions around the end of 2015. And, of course, if they cannot be explained, there is no way of ensuring that they won’t happen again.

Residents are left with the question: what has happened to all the lead laid down and accumulated on surfaces (playgrounds, school yards, residential and commercial premises close to the Strand) during those years of high-level deposition?

Other questions arise from a more minute examination of the graphs. The “Running 12-month Average” format tends to smooth out any daily or hourly ‘spikes’ in dust that are to be expected when a ship is being loaded or unloaded.  Are port ‘lead-loading-days’, when there are strong winds, times when children should be kept indoors or away from the port area? Why is it that over a three year period (2012-15), while deposited dust was increasing gradually, deposited lead was increasing steeply? Has the composition of dust changed? Why is it that the peak of ‘total suspended particles’ of lead (lead in air) was around the middle of 2014 (top graph) while the peak of ‘deposited’ lead (lead on surfaces) was around a year later (bottom graph)? Are there changes in the nature of the concentrates being handled, are there new technologies being employed, are there old failings being overlooked?

The Port Stakeholders Working Group has focused to a large extent on the development and implementation of industry-accepted data collection to be used by the regulator. We now need to look further afield. Whilst we accept that the various miners, refiners and materials handlers operating in the Townsville Port are compliant with government regulations we need to keep in mind that the Port of Townsville Ltd is not subject to those regulations.

The dust and other pollutants being deposited on the suburbs of Townsville and possibly registering as lead-in-blood in some Townsville children, is coming from the Port of Townsville itself and the focus of our efforts should be on reducing, as much as possible, these fugitive emissions. We should be considering whether assessment and remediation methods used in other metals-polluted sites (Mt Isa Q, Broken Hill NSW, Port Pirie SA, Esperance WA) should be brought to bear in Townsville where thousands of under-5s live in close proximity to the port. As Mark Taylor noted in his 2015 study:

While dust metal contaminant loadings [in Townsville] are lower than other mining and smelting towns in Australia, they exceeded national and international benchmarks for environmental quality. The lessons from this study are clear— even where operations are considered acceptable by managing authorities, targeted assessment and monitoring can be used to evaluate whether current management practices are truly best practice. Reassessment can identify opportunities for improvement and maximum environmental and human health protection.

Now that, thanks to the PSWG, we have the technology onsite and information available 24/7 on the internet, we should all pay attention and familiarise ourselves with the issue of pollution associated with Port activities.

In the meantime, the PSWG has further work ahead of it to interpret the new data and use that understanding to ensure continual improvement in order to protect the community of Townsville and its visitors, especially in and around the popular Strand.