It’s all the odder in that two reports dealing with climate change in the region had been released in 2008-09, ‘Climate Change Projections for the Townsville Region’ produced by CSIRO for Townsville City Council (pdf here) and ‘Climate change in the Townsville-Thuringowa Region,’ produced for a state government project called ‘Toward Q2: Tomorrow’s Queensland’ (pdf here). One would have expected both DEWS and TCC to be well aware of both studies.

My immediate concern was that the known decline in our rainfall undermines the water security predictions presented in the DEWS report. All the likely effects of climate change are negative, as far as dam levels and water security are concerned, but just how significant are they?

How much climate change?

‘Climate change in the Townsville-Thuringowa Region’ covers the whole of the Ross Dam and Paluma Dam catchments and the northern half of the Burdekin catchment (which includes the Hell’s Gate catchment), and is replete with climate statistics and predictions. Here is its overview of climate projections for 2030 and 2050:

I have included the evaporation figures here because Ross Dam is so broad and shallow that evaporative losses are significant. On the other hand, I have omitted details of seasonal effects because they don’t seem important, and the whole of the 2070 predictions because the unknowns, so far ahead, make them far more speculative. For the full set of predictions (Table 2, Summary of projections), click here.

It is worth noting that the report’s projections begin from a baseline period 1971-2000 [note to Table 2]. By that time, annual rainfall had already been declining, and temperatures rising, for decades. All of Queensland has been warming, and all of our region has been drying, since at least 1940, as the BoM trend maps show. 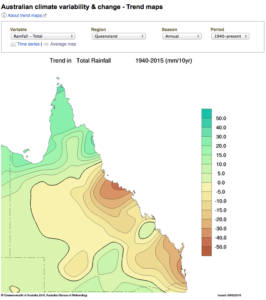 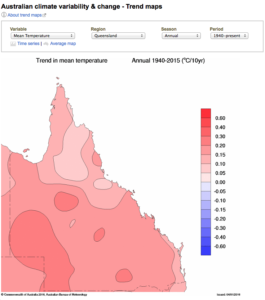 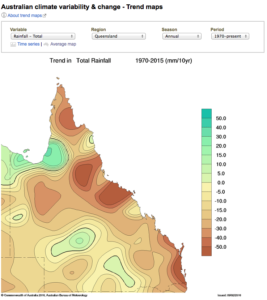 The drying trend since 1970 is even stronger and our region is one of the most severely affected.

It is also worth noting that the majority of climate change projections, everywhere, have tended to be too conservative, i.e. actual changes track the upper range of the estimates more often than the central value. If that holds true for this study, and it does seem to be broadly supported by recent climate trends, we may well experience rainfall decreases of 12% by 2030 and 21% by 2050.

The only certainty is change

In our lifetimes, “climate” has shifted from something essentially stable at human time scales to something dynamically changing. Climate science has come to terms with it by developing the practice of specifying thirty-year baselines against which predictions can be meaningful.

The DEWS report, however, still chooses to quote likelihoods of water shortages in terms of recurrence intervals (“once in x years”). I am well aware that this terminology is traditional but recurrence intervals are calculated on the basis of historical data, so their underlying assumption is that future conditions will be similar to past conditions. That’s just not true any more, and seriously compromises any predictions which don’t take climate change into account.

I have tried to develop an approximate correction factor but there is far more to be done. In particular, historical rainfall across the catchments of our three dams (each different from the regional averages quoted above, and each highly variable) needs to be examined in enough detail to derive robust trends.

In a best-case scenario (low-range climate change, around 4% by 2030 [see Note]), decreasing rainfall and increasing evaporative losses will lead to slightly more frequent shortages of supply from Ross Dam, even with no population growth. For instance, the dam might reach the 10% trigger point once in every six years with 60,000 Ml/yr consumption rather than the once in every nine years predicted under the DEWS report’s “Frequency of water restrictions for Townsville” (130 ML/day capacity Haughton pipeline scenario).

In a worst-case scenario the effects of climate change (on the order of 15% by 2030) on our water security are comparable to, but still smaller than, the effects of the 50% population growth by 2030 projected in the DEWS study.

By 2050, worst-case climate change may be reducing our water supply by 25%. If that happens, and even if our demand stabilises at projected 2025 levels, the DEWS prediction that with current infrastructure we will need “to pump water from the BHWSS more frequently, estimated at about once in 5 years on average” looks wildly over-optimistic and doubling the pipeline looks like a high priority. However, the world will be so different in 35 years’ time, largely because of climate change and our responses to it (see, e.g., Whitmore and WHO), that we just can’t say much more that that.

It seems, then, that climate change tightens the known constraints on our water supply in the short term (2030) but does not change the picture radically. It may be far more significant in the medium term (2050) but just how significant depends critically on the global response to climate change.

These figures are projected rainfall decrease plus a small correction for projected evaporation increase. The proper size of that correction is a subject for further research; my figure is probably far too low.

[no author] ‘Climate change in the Townsville-Thuringowa Region’ [Queensland Government, 2008] (Toward Q2: Tomorrow’s Queensland was a Bligh government initiative as per http://www.cabinet.qld.gov.au/browse.aspx?category=Q2 http://statements.qld.gov.au/Statement/Id/60165 and http://rti.cabinet.qld.gov.au/documents/2008/sep/toward%20q2/attachments/Towards%20Q2_%20Tomorrows%20Queensland.pdf but I obtained the ‘regional summary’ pdf from http://hardenup.org/umbraco/customContent/media/332_regionsummary-tt.pdf )