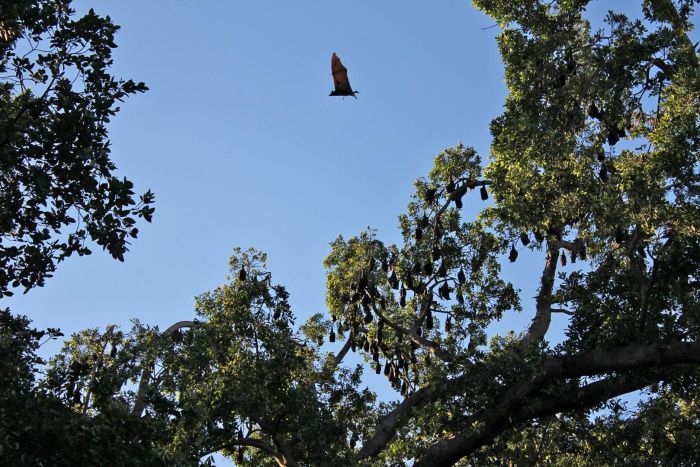 The Local Government Association Queensland’s Craig Johnstone said the proposed co-operative body was unnecessary and state and federal governments needed to decide who would take control of the issue.

“What the LGAQ believes is needed is far more centralised decision making and essentially a decision by the state and federal governments to take over the management of flying foxes,” Mr Johnstone said.

“Because only then can you have a population-wide approach to the management of flying foxes rather than the ad-hoc approaches which councils are forced to do now.”

The parliamentary report into flying foxes highlighted the ecological importance of the creatures and the impact they had on human communities.

It also recognised the impact that habitat reduction has had on the flying foxes.

In a statement, committee chair Andrew Broad said the committee determined that local councils and residents needed greater support to understand the management options available to them.

“Nationally protected flying foxes are environmentally important, and we need to ensure they continue to thrive into the future.

“At the same time we’ve been listening to communities along the eastern seaboard, and it’s clear that the impacts of flying foxes on affected residents can be significant.

“Impacts can range from the inability of some residents to sue outside areas due to smell, noise and waste impacts, to the considerable disruption caused by large camps in the middle of business districts or adjoining nature parks.”

“I would certainly rather see that bats be managed at a higher level, by the Federal Government, that can take a broader-scale longer-term vision as well as being able to balance the very important benefits of bats against some of the community issues,” Ms Hamilton said.

Ms Hamilton said revegetation was one step to getting bats out of town parks, but said part of the solution might be a change in attitude.

“Bats are not necessarily the health issue that people appear to think they are,” Ms Hamilton said.

“You are only going to get hurt from a bat if you manhandle one. You are not going to get sick from smelling a bat colony.”

“There is a lot of attitudinal change that we could affect to allow people to live more compatibly with bats in urban areas while we are working towards improving their habitat.”

Currently local Queensland councils have authority to manage their bat populations in accordance with state and federal laws that protect the animals.

The Hinchinbrook, Charters Towers, Townsville and Burdekincouncils have all had problems with flying fox colonies in urban parks.

Attempts to move colonies out of town using visual, audio and biological deterrents have been largely unsuccessful.

“Individual councils are dealing with flying fox colonies all the time. They are somewhat hamstrung in the way they go about that because of state government regulation,” Mr Johnstone said.

“And even if it is effective it tends to be only temporarily effective or merely shifts the problem to another council area.”

“We believe that the State Government should take over management of flying fox colonies.”