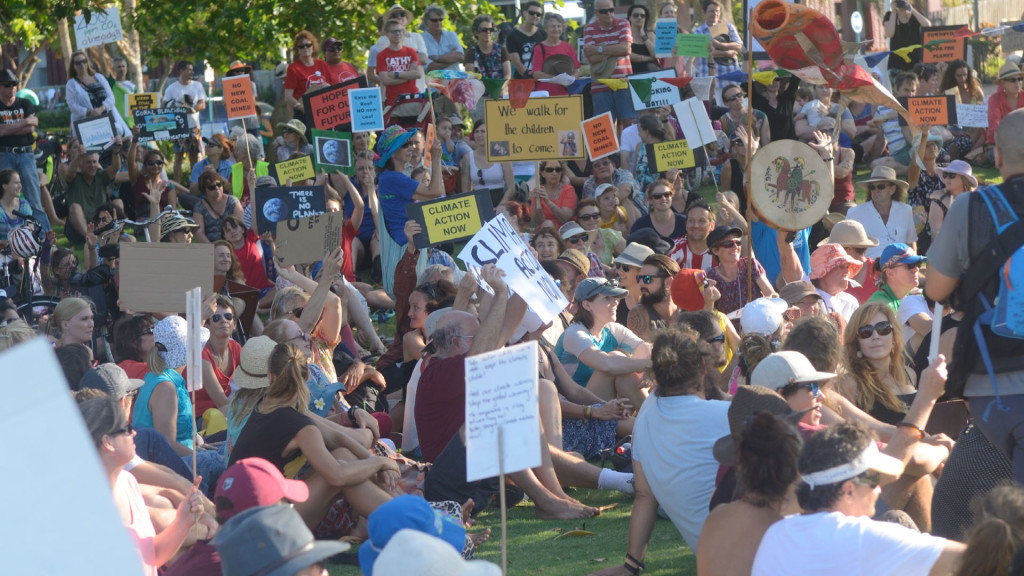 An estimated 600+ people marched on a hot Saturday afternoon in Townsville to join over 2300 such groups in 150+ countries calling on global leaders to take strong and effective climate action.

Arriving at the Burke Street headland after walking the one kilometre from the Rockpool, the crowd listened to short addresses by Dr Charlie Veron, Dr Farvardin Daliri and NQCC’s Sandy McCathie before joining in a rousing rendition of One Million Women’s Paris-tailored version of ‘You’re the voice’, led by Islanders Sara Shaw and Danni Ceccarelli.

The 30 second YouTube clip, filmed and produced by Santiago Calero of zonasiete.net., brilliantly captures the essence of the march.

The event was immediately followed on the beach by the making of Heads in the Sand 2, a stop-motion video for Paris – a follow-on from the ‘Heads in the Sand’ image that went viral last year, and which was described by Buzzfeed as the world-best summing up of climate action by our leaders. The original image and the video, which has been sent to Avaaz for showing in Paris, were the brainchildren of the creative Magnetic Island Cranky Curlew Productions.

Thanks to all who helped make this great turnout happen and made the event work – to our speakers, to Bob and the Townsville Folk Club, Wild Gravity, Sabine Carter, Malcolm Tattersall, Greg Keating, Marc Gregory, Santiago Calero and the numerous NQCC volunteers who acted as marshalls, helped set-up and pull-down at the event and helped with promotion, and, especially, to all those who came on down and helped send a strong message to Paris.

It is worth noting that all local politicians at all levels were individually invited to attend the march. Deputy Mayor Vern Veitch sent an apology, explaining that he would have been there had he not had a prior engagement. We didn’t hear from – or see – any other politician. 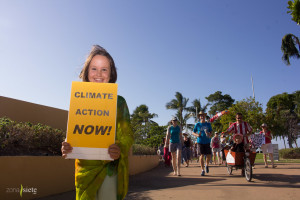