Heads in the Sand 2 – When it all starts to move

Heads in the Sand 2 is a mass animation stop-motion clip on global warming, created on the beach at Townsville’s Strand promenade for the decision-makers in Paris.

When hundreds of climate protestors gathered on the Strand Beach, Townsville, following Townsville’s Climate March at the start of Cop 21 UN Climate Conference, North Queensland Conservation Council and friends from Cranky Curlew Productions had some special ‘Heads in Sand’ work for them.

The brainchild of the creative Magnetic Island Cranky Curlew Productions, the YouTube Clip, filmed on Saturday 28 November 2015, is a follow-on from the ‘Heads in the Sand’ image that went viral in September 2014, and which was described by Buzzfeed as the world-best summing up of climate action by our leaders.

The original image and the video has been sent to Avaaz for showing in Paris during the COP21 convergence.

The ‘Heads in the Sand 2’ event was organised by Cranky Curlew Productions as its contribution to North Queensland Conservation Council’s march and rally, and as part of the weekend’s world-wide marches and rallies in support of strong and urgent effective action on climate change – no new coal mines, a phasing out of existing coal-fired power generation and an early and just transition to renewable energy. 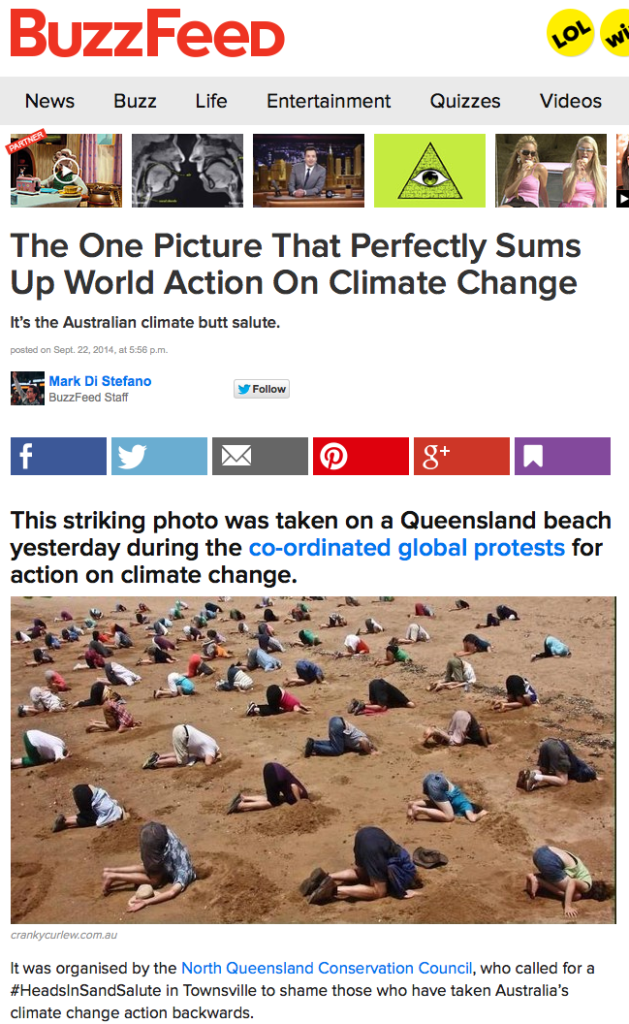