No Underground Coal Gasification for Queensland

Great news earlier in the week, when Queensland Minister for Natural Resources and Mines Anthony Lynham stole a march on everyone and overnight banned underground coal gasification (UCG), the terrifying process whereby underground coal seams are ignited in order to retrieve the gas, in Queensland.
He argued that the environmental risks outweigh economic benefits.

The ban came after UCG pilot company Linc Energy, which last week went into voluntary administration, was recently committed for trial in the District Court on five counts of wilfully and unlawfully causing serious environmental harm.

One up for the Minister and one up for the environment. If you feel like saying ‘thanks’, click here for his email address.

93% of the Reef is bleached

Definitely bad news: 93% the Great Barrier Reef has been found to be suffering from coral bleaching. Bleaching is the result of warm water continuing for some time. And, in a leg-bones-connected-to-the-thigh-bone chain, warm water is connected to climate change, which is think to carbon emissions, which is linked to the burning of coal. Obviously some of our leaders have not studied anatomy because they are barracking for the opening up of the massive coal mines in the Galilee Basin. Read or listen to JCU’s Terry Hughes interview with the ABC, where he pulls no punches on sheeting home the major contributor to this international disaster.

And just in case you were wondering about the warm water trigger, March 2016 was the 11th consecutive month for which the monthly global temperature broke previous records going back to 1880. Read the Special BOM report here. And according to Peter Hannam from the SMH, there’s worse in store.

Invasive flora and fauna (such as feral cats) threaten our native biodiversity and cost Australia billions of dollars every year. You can have your say on the Queensland Government’s draft Queensland Weed and Pest Animal Strategy 2016 – 2020.

The draft strategy establishes a statewide planning framework to address the impacts of Queensland’s current and potential weeds and pest animals. The strategy will guide policy, inform stakeholders and provide for coordination.

The Strategy aims to ensure that organisations including Government have a clear understanding of their responsibilities for managing weed and pest animals in Queensland. This is important as under the new Biosecurity Act everyone, including landholders, will need to take an active role in managing biosecurity risks under their control.

To have your say online or call the Department of Agriculture and Fisheries on 13 25 23 for more information. The consultation closes on 26 April 2016.

If you want to do something about invasive species (this time weeds), NQCC is pleased to announce that it is auspicing another great urban rehab project for Geoffrey Bay Coastcare on Magnetic Island, the driving force behind which is the indefatigable Tony O’Malley (left, on site).

As part of the project, the Coastcare group will be weeding at the Hayles/Horden Avenue corner in Arcadia (bring hat, gloves, water) from 8-10am on Sunday 24 April. Between 2pm and 4pm on the same day, there will a meeting to plan what interpretation signage will be best for the project. That will be held at The Arcadia Bowls Club, Marine Drive.

So if you want to mix a visit to Maggie in this glorious weather with a bit of physical and mental stimulation, this is a great opportunity. 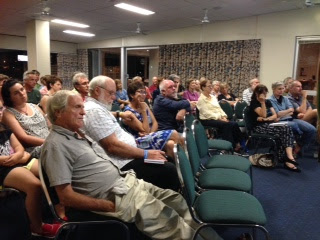 The 60 people attending NQCC’s Rescuing the Reef forum held at the Yacht Club last month were enthralled by JCU’s Jon Brodie’s ‘pull no punches’ presentation on the state of the Reef, the scope of the problem and the need for much, much more money to be poured quickly into fixing the quality of the water flowing into the GBR lagoon.

Attempts to deal with the problem of nutrient-rich sediment running into the Reef’s waters are seeing results fall well short of targets. Partly this is because of the inadequacy of the funds dedicated to solving the problem and partly because of the time lag between, for example, planting trees and them becoming big enough to help limit erosion.

The lack of money is incredible given that, as Jeremy Goldberg told the audience, the Reef is seen by people across the nation as Australia’s most inspiring icon by far.

While only governments can distribute public funds and make laws about land use, it is us that has the power to put the pressure on them to do so. Unless they hear from us, they’ll look elsewhere. Help out by ringing Federal Environment Minister Hunt’s office at (03) 5979 3188. 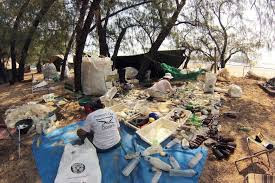 Rubbish washed up on the beach might be a familiar sight for you and you might already be picking up those bottles, food packaging and fishing gear, but every time you come back to your beach new stuff has washed up. The only way of making a real change is analysing where the debris comes from and finding ways of stopping it from ending up in the ocean in the first place – a Source Reduction Plan.

Join Tangaroa Blue Foundation for a free half day workshop that will guide you hands on how to use the information and data you might have already collected to address local stakeholders and communities and reduce the influx into the ocean. You will learn how to analyse the types of debris on your beach, how to pick certain items that can be targeted, how to engage partners in your project and how to implement solutions. By the end of the workshop you will have an action plan lined up for your specific litter problem that you can take back to your community to change your rubbish issue. You will also learn how to measure the success of your project, and will be empowered to run other similar action plans in the future.

If all we do is clean-up, that’s all we’ll ever do! Let’s find ways to stop the flow of rubbish into our oceans!

Late last year, the Courier Mail reported that 4400 properties in Townsville are at risk of flooding as a result of climate change induced sea level rise. The image left (courtesy of Areo3Dpro) is obviously a mock-up but may be an accurate prediction of what e face if we don’t persuade our leaders to address climate change seriously.

The Coastal Risks website uses new technology to give us an idea of just how much trouble rising seas levels may cause by 2100 if we don’t stop climate change in its tracks. Here’s the site’s self-description:

This BETA version of Coastal Risk Australia (CRA) has been opened for public consultation to show you what the Australian coast may look like in 2100. It is an interactive map tool designed to communicate coastal inundation associated with sea level rise to the year 2100. Using Google Earth Engine technology, CRA allows you to investigate the extent of coastal inundation using the latest 3D models of the Australian coastline. Data have been captured using airborne LiDAR technology to create detailed digital elevation models (DEMs), which are then combined with ‘bucket-fill’ inundation modelling to create the map-based visualisations.

Click on one of the well-known places on the front page, accept the conditions of use and you’re away. Pan and zoom to your places of interest to see the high tide flood extent for today (dark blue) and the high sea level rise scenario for 2100 (light blue). Type in a location in the top left Google Search once you’re in the map and you can go to any coastal location around Australia where there is data. In the top left corner of the map screen you can see the predicted scenarios. You are able to select either the high, medium or low sea level rise scenarios to look at how the 2100 high tide inundation changes with each scenario.

While we are on the subject of websites, another great one for exploring our wetlands is the Departmental one.

Here at NQCC we do our best to keep you up to date with environmental news but there’s a lot to cover and we don’t get around to all of it. Here are some other local voices that may help to fill the gaps:

That’s all for April folks – look for Paperbark in your letterbox in the middle of May if you have already signed up to receive our newsletter. If you haven’t, please visit this page to do so.