Welcome to our November edition of Paperbark, where we keep you up to date on the latest conservation news in North Queensland. This edition is dedicated to the memory of a strong-willed, truly inspirational woman and conservationist who passed away in October this year. The Wildlife Preservation Society of Queensland has posted a beautifully-written commemoration of her life. Read it here. 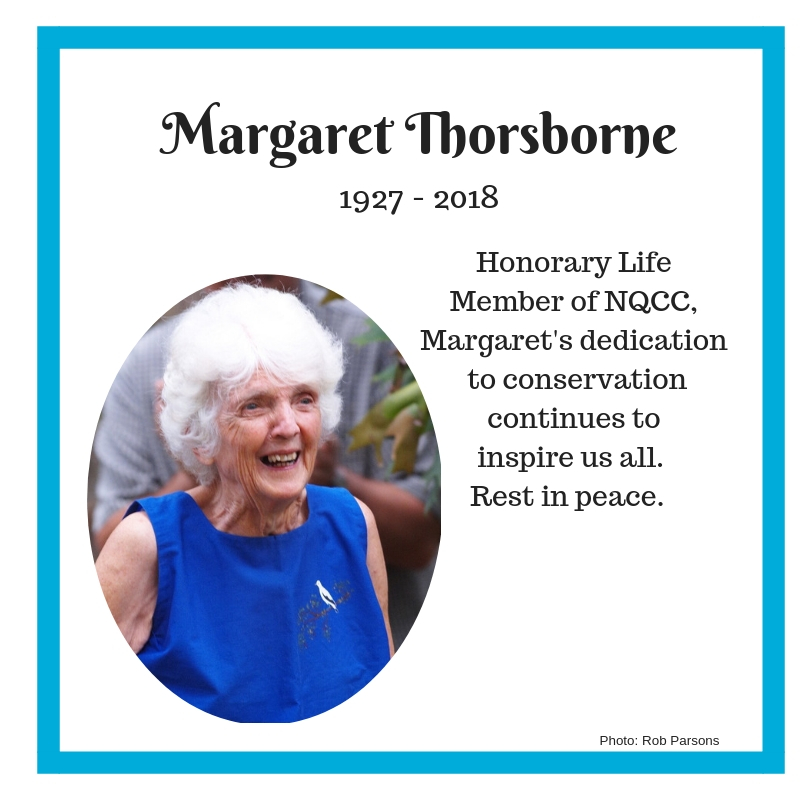 What have we been getting up to?

The last few months have seen our Campaigns Manager (Tarquin Moon), actively engaging with all levels of government and the community while appearing in the local media numerous times, ensuring the voice of the environment is heard – loud and clear! We count ourselves very lucky to have her with us and can’t wait to see what the future holds. Following our AGM, we have also welcomed some new faces on board our Management Committee. Read on for the details...

Our Annual General Meeting was held on the evening of Wednesday, 19th September among the fruit trees in our own backyard, where we enjoyed delicious wood-fired pizzas by Dave Sewell (thanks, Dave!) while the official business got underway. Tarquin’s staff presentation took us on a journey through NQCC’s history, the details of which were affectionately recalled by some loyal, long-term members present. The conclusion of the meeting saw us welcome in a new Management Committee, with a combination of new and familiar faces coming aboard. Say hello to our new NQCC crew for 2018-19!

We would like to thank all of you who came along to support our organisation as we begin a new chapter for the history books. To all of those who couldn't make it - thank you for supporting us in any and every way that you do! We are nothing without our members. We really would cease to exist. Really.

An ingenious initiative to encourage people to actively engage in environmental politics (while practicing the declining art of hand-writing letters), Tarquin’s ‘Loud Letter Writing Event’ was a huge success, with attendance spanning a few generations. These enthused (and enraged) locals took up residence in NQCC's office to pen letters to the government regarding Adani’s approvals for the proposed Carmichael mine. If you'd like to brush up on your letter writing or written advocacy skills, contact Tarquin for inspiration! 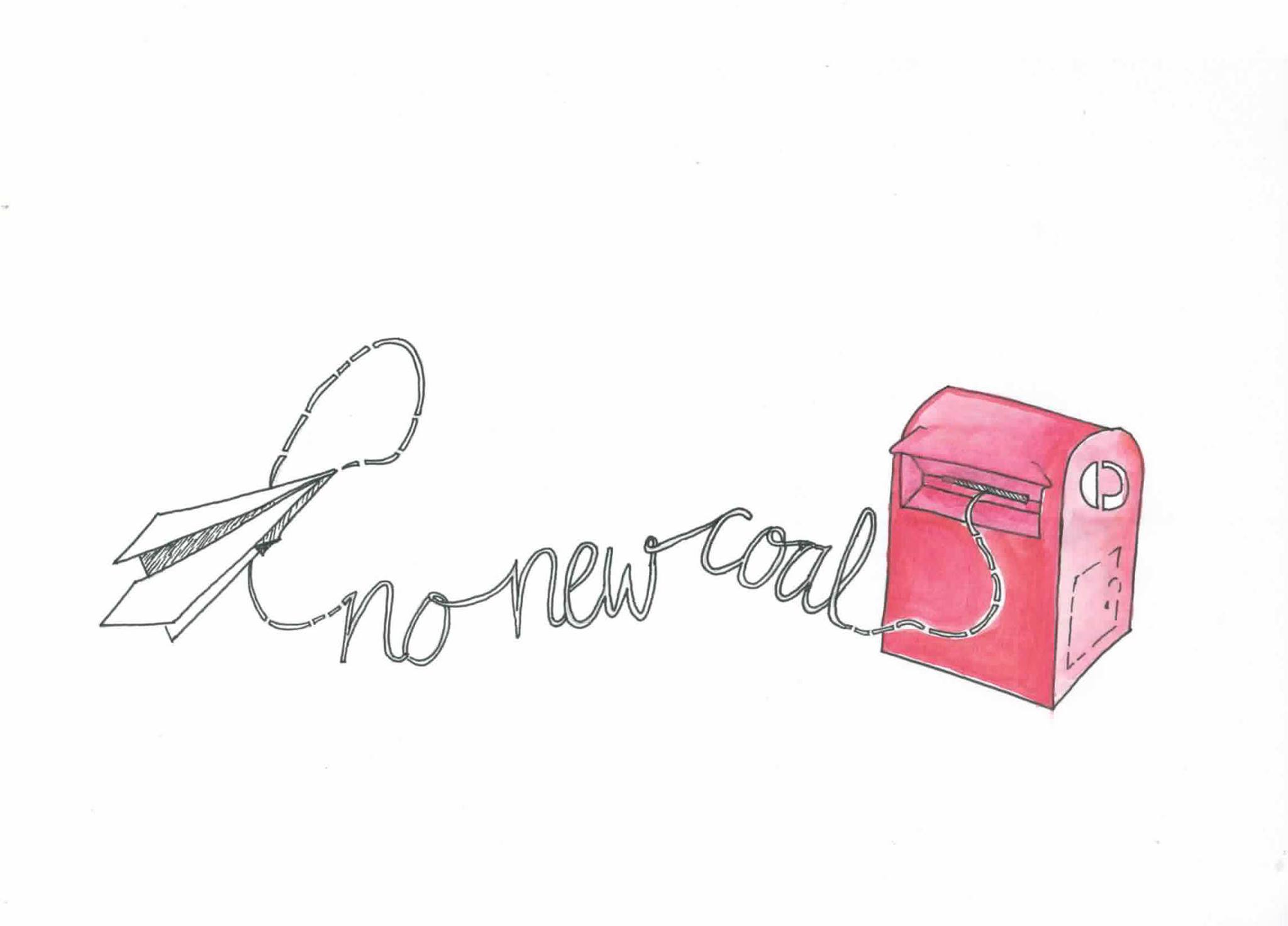 On 25th July, Tarquin represented NQCC at JCU's Market Day, where she was assisted by two keen volunteers. They used the opportunity to promote Green Drinks (see below for more info), meet with other stallholders, gained some new contacts for our mailing list and acquired signatures for a No New Coal petition.

Hosted on beautiful Magnetic Island, this symposium was a fantastic event, and NQCC would like to say a huge thank you to Wendy Tubman, as one of the event's main organisers. The program was jam-packed with amazing speakers and it prompted lots of discussion about what a viable, ecologically sustainable future for North Queensland could look like. An upshot of this symposium was an alliance of organisations, which is just beginning to take shape. Watch this space... 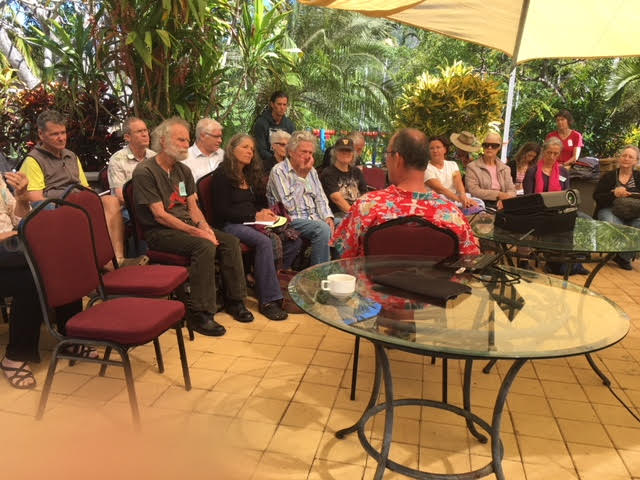 Beginning in August, the first Friday of every month has seen a range of people who are interested in the environment come together for a casual socialising and networking event at the Seaview Hotel on the Strand. While the events have been organised by Tarquin and promoted throughout NQCC’s networks, the concept of ‘Green Drinks’ is an international idea, which does not belong to any one organisation, but is instead designed to bring like-minded people from different walks of life together to discuss environmental ideas. Each event thus far has attracted approximately 40 people, with many returning time and again. Join our  "Townsville Green Drinks" Facebook group here so that you never miss one. If you haven’t yet attended, please do! If you live outside of Townsville and wish to start your own Green Drinks event, visit www.greendrinks.org, and let us know so that we can help you promote it!

The next Green Drinks will be held on Friday 1st February, to give us all time to recharge over the New Year.

We live in a time where plastic not just litters our ocean, but rules it - and all of its residents. Coral reefs are feeling the impacts of climate change more and more each year and Australians are calling for the mass culling of sharks - education and advocacy are more important than ever. 'Blue' is a documentary which was described by Greenpeace Australia as "a cinematic song for our oceans; beautiful, intimate and grand. Fearlessly truth-telling, yet passionately hopeful".

The film's producer - Sarah Beard - worked in partnership with NQCC and The Ville to bring this film to an audience of 225 people in late September. The audience, comprised of students, divers and conservationists of all ages, found the movie informative and inspiring, with some making personal pledges to ensure our oceans are cleaned up and restored. Following the screening, questions were taken from a panel of guest speakers, including Adam Smith from Ecologic, Jason deCaires from Tangaroa Blue, Dr Dean Miller from GBR Legacy, David Coley from Plastic Free Townsville and Valerie Taylor AM - pioneering diver, shark advocate and conservationist. All proceeds from the event went to Great Barrier Reef Legacy, who carry out important work for the conservation of our beloved Reef.

If you missed out on our screening but would like to see this must-watch documentary, please visit https://bluethefilm.org to join a screening near you - or host one yourself. 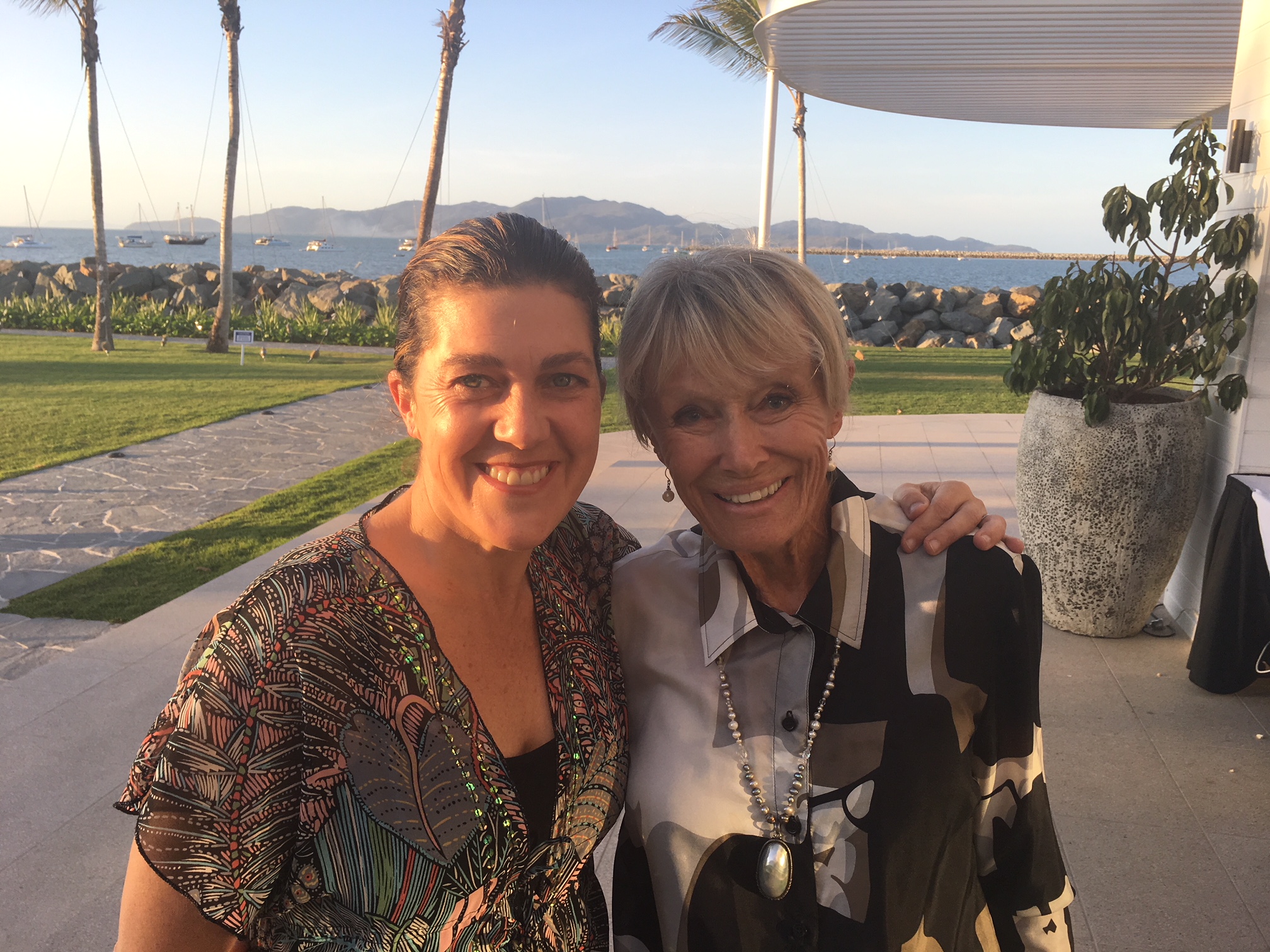 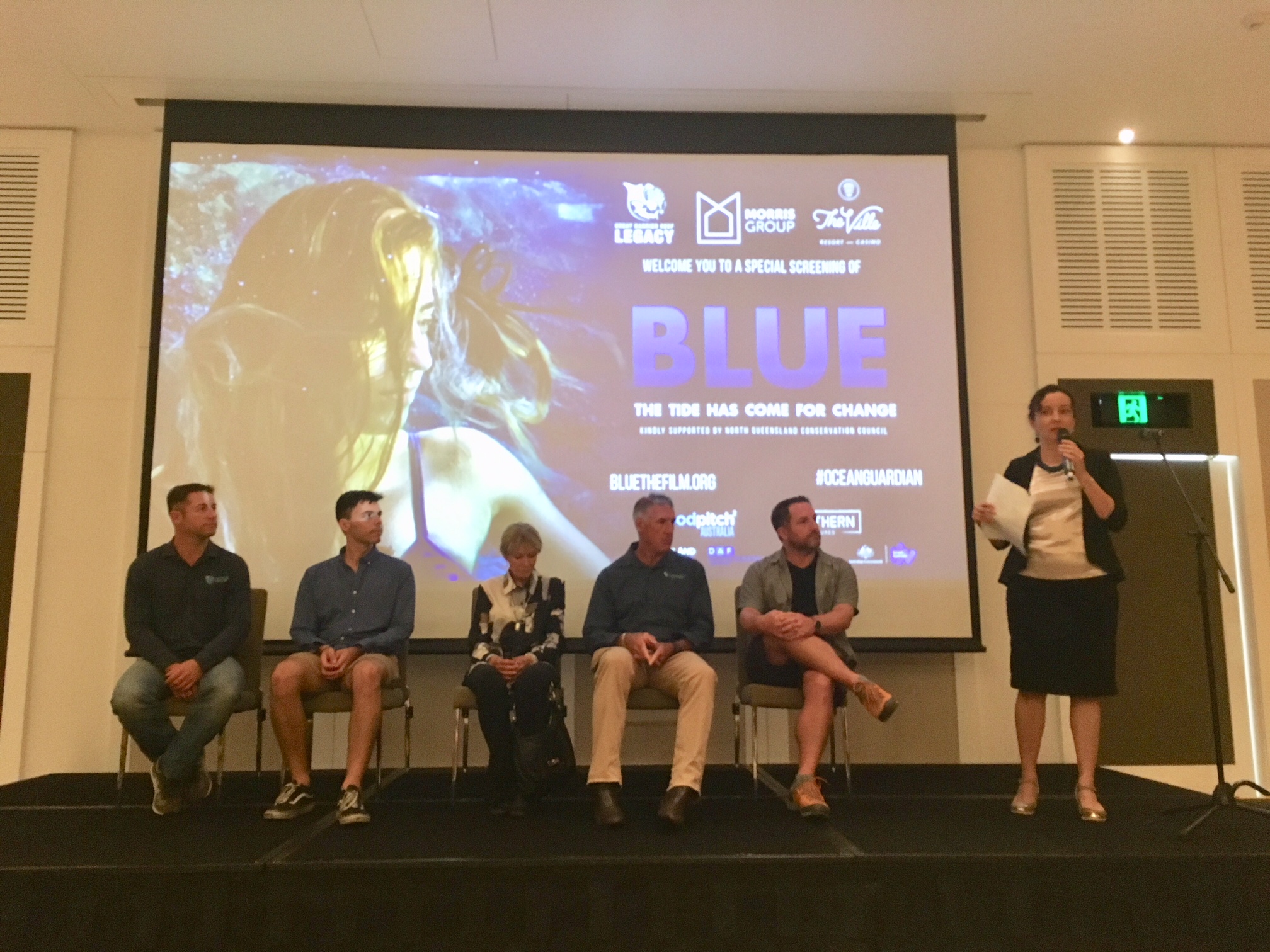 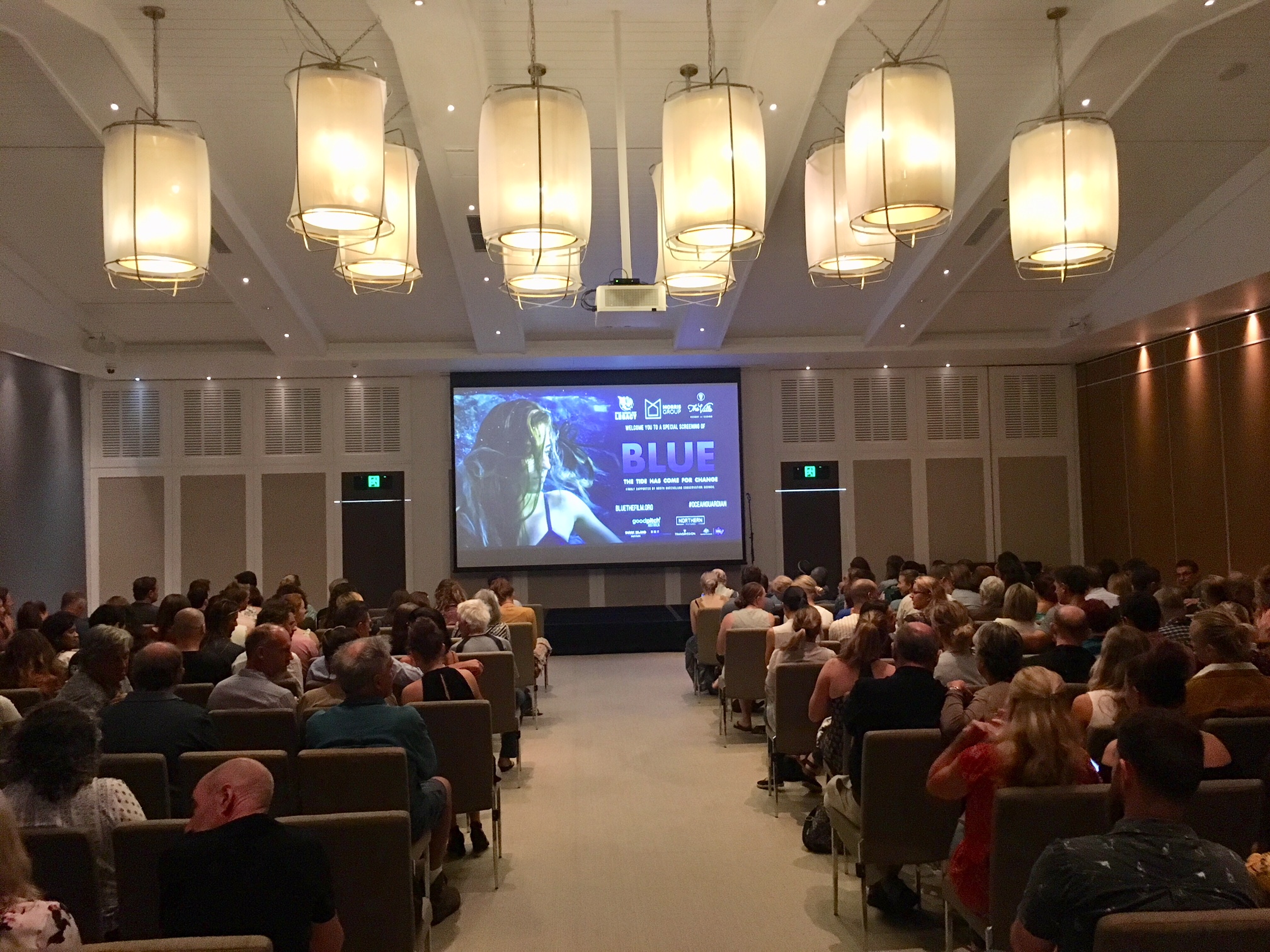 Since the last Paperbark edition in July, I have been juggling a few urgent and emerging local issues like the Oak Valley cattle yard Development Application that we had concerned would encroach on Black-throated Finch.  We have made other submissions, for example one on the Senate Inquiry into Australia’s faunal species extinction crisis and another for the Resource approval efficiency consultation by the Dept. Natural Resources, Mines and Energy.  Bill Laing from our Management Committee, is currently helping NQCC make a submission on the Kidston Project which is a combined solar and pump storage hydro project that utilises the closed Kidston gold mine site in the township of Kidston, around 400kms NW of Townsville.  It has also been a busy time responding to numerous media articles from Clive Palmer’s bizarre Galilee Basin powerstation that he said would lower power prices for North Queenslanders, Townsville City Council’s climate costal adaptation survey, to the Qld Government’s plastic bag ban!  The most explosive story was the revelation that Adani is likely to have been conducting drilling in breach of current approvals. With the help of Crystal Falknau, I presented the facts on this story in a video that had some of the highest engagement on our Facebook page this year.

In the past few months I have been in contact with some of the Cassowary Coast campaigners as well as a meeting in Mackay with Peter McCallum from the Mackay Conservation Group and Michael McCabe from the Capricorn Conservation Council (Rockhampton).  Often, these face-to-face meetings are absolutely invaluable in developing strong networks. One of the highlights of the last few months was a meeting with Conrad Hoskin to talk about his research at JCU into threatened numerous locally threatened species like the Gulbaro Gecko.

In the past few weeks, my attention has been on the concerning issue of the privatisation of our Hinchinbrook Island wilderness, the re-emergence of Hell’s Gate Dam as a viable project and concerns about reef water quality targets not being met with consequences for the Great Barrier Reef.  I also look forward in time to the possibility of a Federal Election that will eventuate in the first half of next year.

I would like to thank all of our members and supporters who send me inspiring emails in response to my calls to action.  I have not replied to many of those emails due to lack of time but know that I heard from you and I really appreciate your energy to support NQCC.

Submission into resource approval efficiency.  The Department of Natural Resources Mines and Energy (DNRME) opened up this consultation process with the aim to make it easier for mining companies to gain approvals for their activities.  NQCC argued that greater clarity for business is understandable but not at the cost of our environment.  Our submission focused on the need for the department to be required to consider recommendations from the Land Court in the appeals process (currently they are not), for the government to designate 'no go areas' for resource activities (such as areas of high ecological values), the inherent problem that assessments are conducted by companies paid by proponents (& then assessed by inadequately resourced departments) and the problem that the Coordinator-General has repeal rights leading to our environment coming off second best.  Perhaps the Environment Minister might also be given appeal rights? 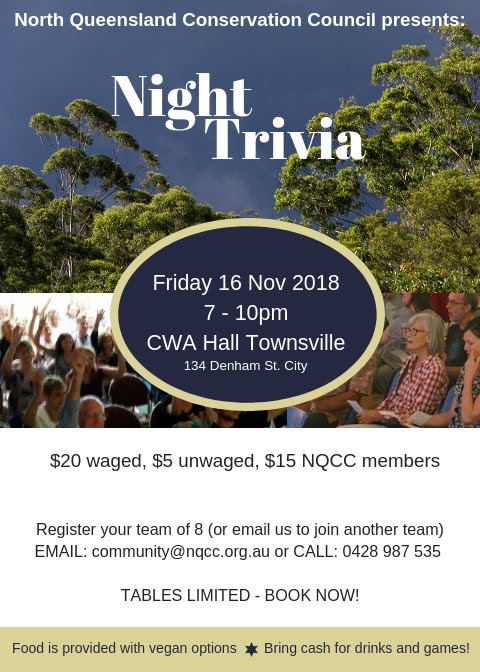 WHAT ARE YOU WAITING FOR?

Email [email protected] with your team details and you will receive a link to purchase tickets. 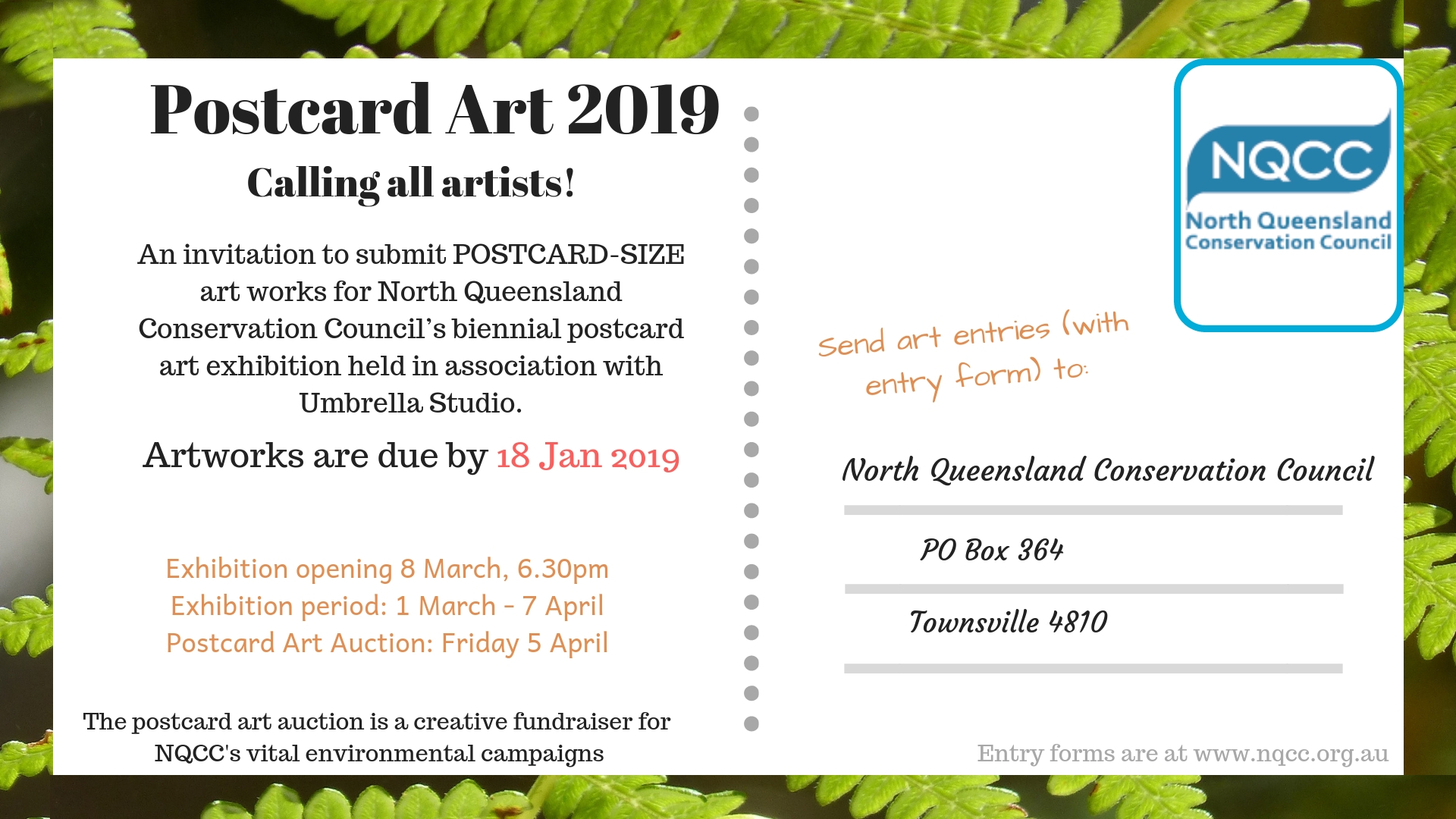 Our Facebook page is a great way to keep up-to-date with our campaigns and events!