October has seen NQCC join with other members of the conservation movement to celebrate two significant anniversaries, which has us reflecting on how far we've come and what vitally important achievements we have made! We have also had a bit of fun with our largest annual fundraising event, which we were thrilled to share with our local supporters.

While our State and Federal Governments are still taking negligible action on our top environmental crises, the power, passion and innovation of scientists, individuals and businesses means that there is some good news out there!

NQCC continues to work with campaigners across Qld, meet with decision-makers, build connections with allies and engage people in the #SONP or #SaveOurNationalParks campaign. Similar campaigns are being waged elsewhere as governments across Australia and the world vote for commercial interests over protecting what little biodiversity is left.

In Queensland the message from the government is clear - they plan to continue opening up National Parks across the state to business interests. This policy change means that conservationists and communities are constantly arguing against proposed commercial leases or boundary changes of National Parks . 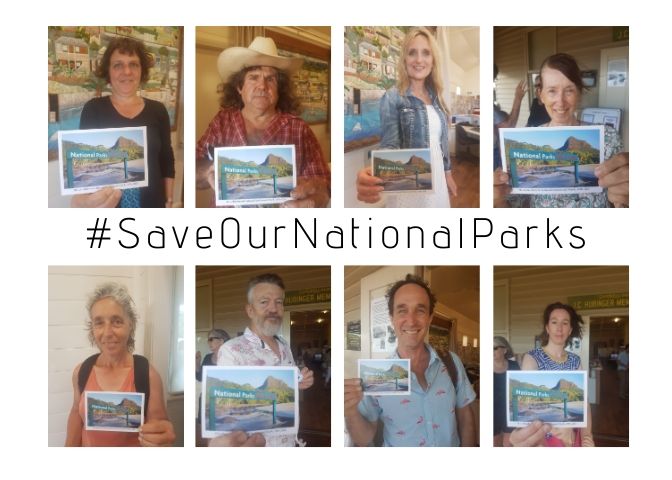 This policy change opening up National Parks to business interests started with the Environment Minister of the time, Kate Jones. NQCC believes that visitor facilities are best publicly funded and available for the general public and use by tourism operators (who obtain a permit) rather than allowing for commercial operators to monopolise access to National Parks!

Qld's National Parks were first protected for the primary purpose of biodiversity conservation under the Nature Conservation Act 1994 (Qld). The secondary purpose was for visitation of National Parks which in turn bolstered the primary purpose by raising public awareness for biodiversity conservation. It is a neat circle of protecting values and of those values being experienced by generations of people who become the custodians of these places. 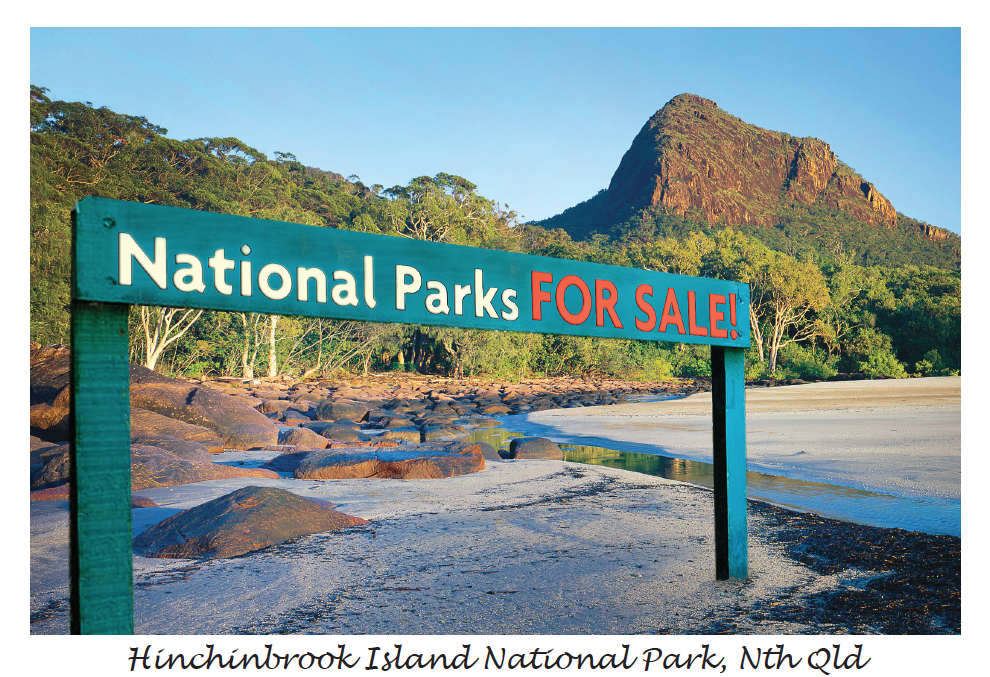 If you haven't already..... get your hands on one of these postcards and send us your selfies so that we can flood the internet with our #SONP selfies!!! (Or photoshop this image in your selfie!).

Should the Queensland Government be giving Adani Australia a royalty holiday?

There are so many reasons to oppose the Adani mine in the Galilee Basin - contribution to climate change, environmental destruction, and the impact on water resources and the Great Barrier Reef.

Here is another - Adani is currently negotiating with the Queensland Government for a royalty “holiday” – this would mean that Adani could defer royalty payments for as long as ten years. This would result in a subsidy to Adani that could be as high as $700 million which works out at around $350 per Queensland taxpayer.

Adani wants to dig up Queensland coal, sell it overseas and not pay a cent in mining royalties for up to a decade.

Adani is being given this subsidy presumably in recognition of the jobs the mine will create. All signs are that the number of ongoing jobs created will be less than one thousand. This works out as a subsidy of around $700,000 per job.

The State Government has set 30 November as the date for the royalty deadline to be finalised.

Please write to the Queensland Premier and ask her not to go ahead with this subsidy. Please also send a copy to your local MP.

Don't put Greenies in the Corner!

We are all working towards conservation and climate action, we are all committed to deep and genuine systemic changes such that we live within the planet’s biophysical realities and ecological processes.

Unfortunately, the change is not keeping up with the scale of the problem and our society is polarised like never before!  How do we get out of this mess?  That really is the question.  Like other conservation councils across Qld, NQCC realises that we need to engage the sort of people who don’t identify as greenies but like us, they know that without fresh air or clean water, humans have absolutely nothing. And we invite you to contribute your thoughts and ideas! 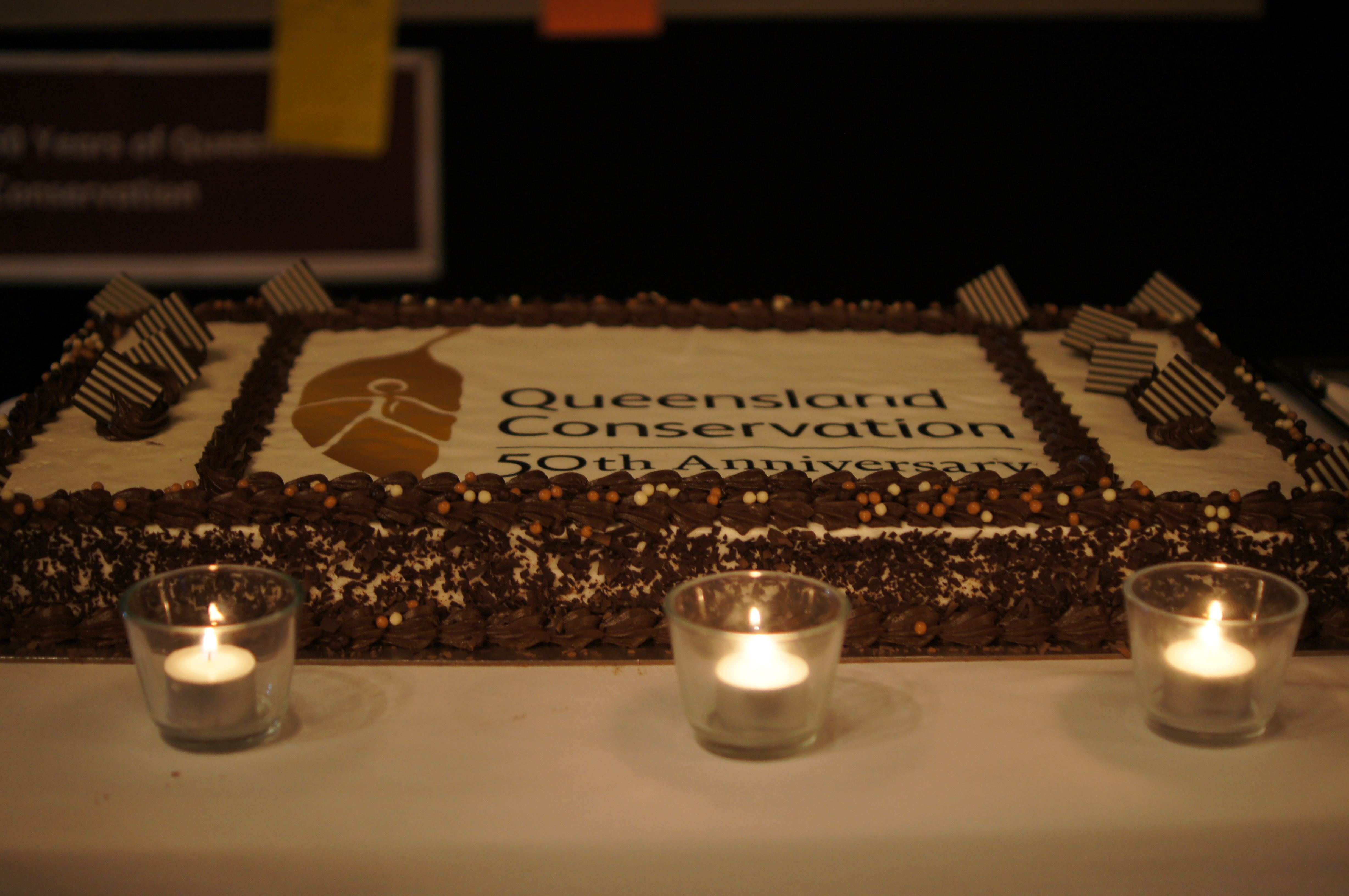 This event was quite the star-studded evening, with special guests from the conservation movement sharing their memories from when Queensland Conservation Council (QCC) was first established back in 1969.  These early campaigners were fighting for the environment at a time when Joh Bjelke-Petersen was the Premier and the Qld Government didn't even have an environment department!  At the Anniversary dinner we heard from QCC Director Louise Matthiesson about how we need to nurture the young campaigners in the climate strike movement and we also heard from some of the previous QCC campaigners and Management Committee members.   The event was well attended and it was a great chance to speak with so many of the people who hold the history of the Qld environment movement in their stories and memories. 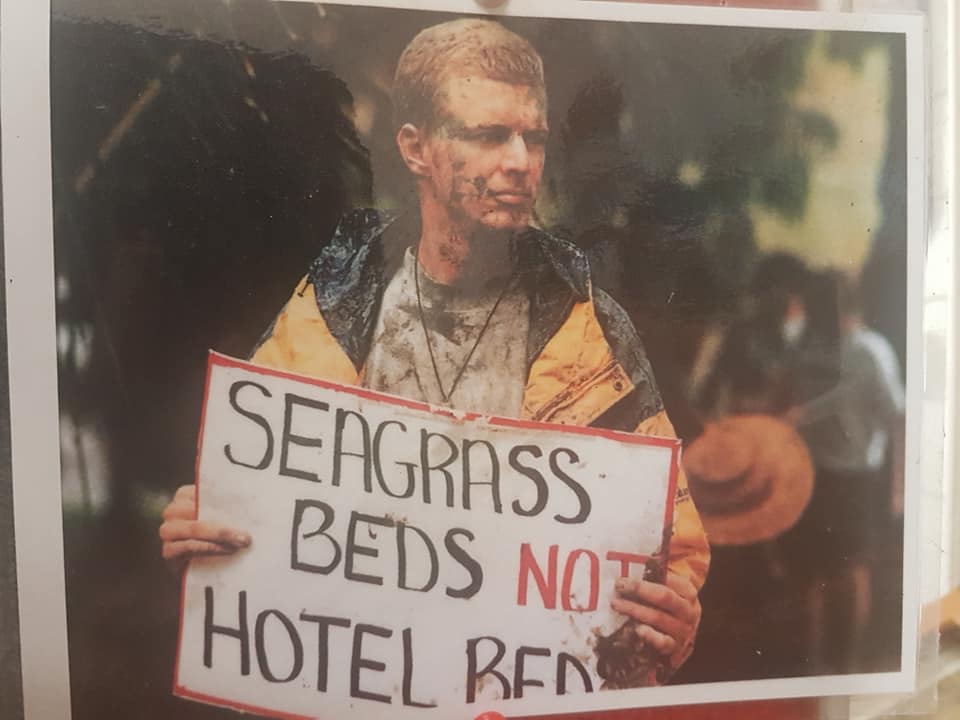 This event saw the opening of "Wilderness Matters" - a multimedia display showcasing important images, articles video footage from the campaign. We highly recommend that you visit the display, which is open to the public until 16th November.

Where: Cardwell & District Historical Society (next to police station) 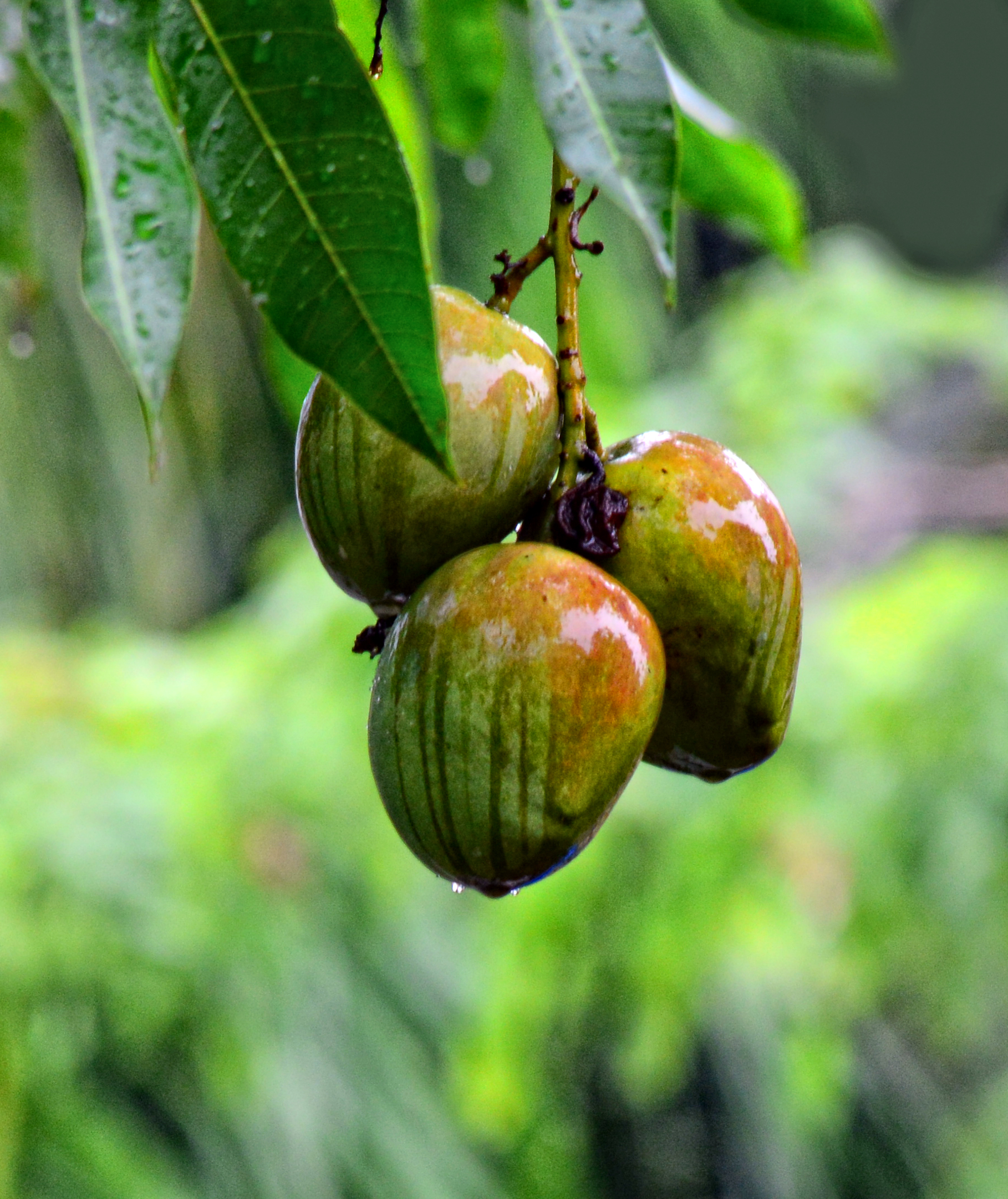 This event is coming to Townsville next later in November - a lovely evening with bands and memorabilia!  Do you have lots of green mangoes?  We need them for our catering!

Earlier this month we brought together some wonderful, environment-loving people to help us play Trivia and make some cash for our conservation efforts. Not a bad excuse for some silliness and fun!

Congratulations to our two winning teams - the Bogglers and Suppository of Wisdom! Thank you to everyone who came along to support our event, and to our dedicated team of volunteers for their hard yakka!

For photos and a run-down of the night's shenanigans, follow the link below to read our blog post!

Thank you to all who contributed to this fundraiser! We sold 197 tickets to 48 supporters, raising over $900 for our work. We really can't say enough great stuff about the businesses who supplied our prizes - Coffee Works, The Source Bulk Foods, Mary Who? Bookshop and Gecko Interiors! Please visit their websites to learn more about them and show your support - you won't be disappointed!

If you have a prize or service to offer in exchange for some local exposure for your business, email us at [email protected] and let us know! We'd love to work together with like-minded business owners to fundraise ethically and locally. 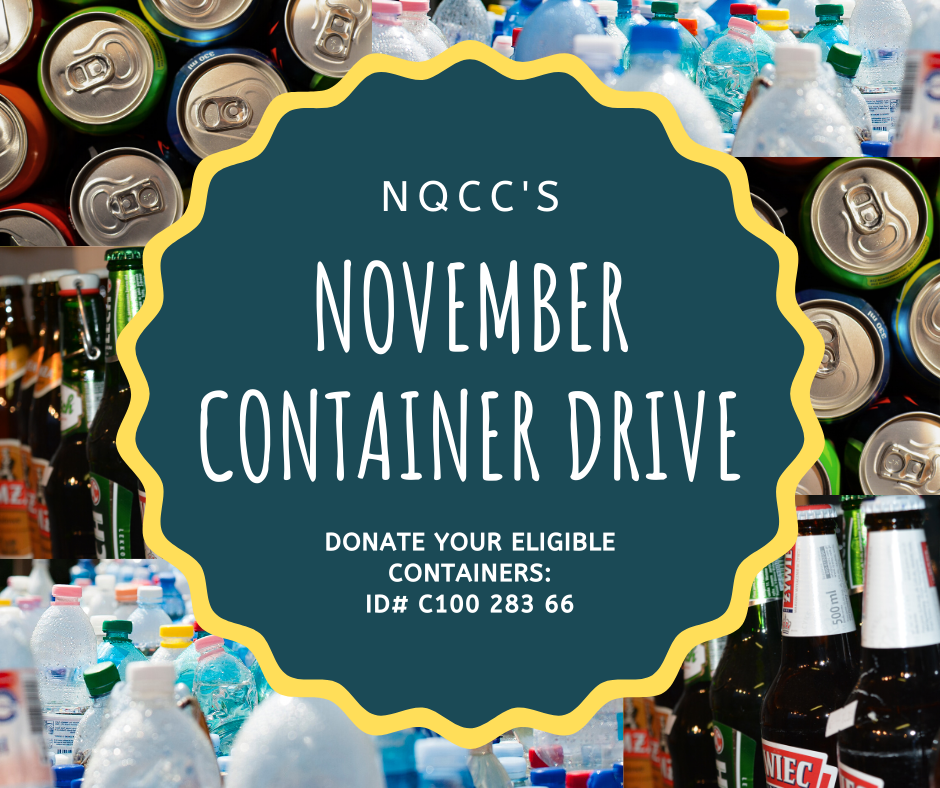 The Container Deposit Scheme has been implemented in our beautiful state for 12 months now, recycling over 179 million containers in that time! We'd like to celebrate the scheme's 12-month anniversary by seeing just how much of an impact we can make with it!

For the month of November, we will be making a lot of noise about this scheme, to raise more awareness about the benefits of recycling, while contributing to our fundraising efforts.

How can you help?

Bring your eligible containers to our collection bins at 114 Boundary St, Railway Estate

Take your eligible containers to your closest depot and quote our ID number:

You can also encourage your family and friends to get recycling via social media and word of mouth!

When you bring your containers to us or quote our ID number, NQCC receives 10 cents from each container - which all adds up! We have already made over $1,500 from this scheme (thanks to our generous supporters) and the benefits for the environment are numerous!

There is a campaign launching in Townsville to grow our renewable energy industry?

Learn more about it here!

You can now vote for your favourite Australian bird?

Do bush stone curlews make you laugh when they run? Have you forgiven that magpie for swooping you when you ride past because its morning warble warms your heart? Want to raise more awareness for the the plight of North Queensland's black throated finch?

Nominations are now open for the Guardian's 2019 Australian Bird of the Year. Why not get the family involved and get competitive?

Thank you for all that you do for our environment and each other.