Feeling the heat
Sadly, just in case it wasn’t newsworthy enough, the year 2015 was officially the hottest year on record.

The start to 2016 in North Queensland has so far been hot and unseasonally dry. Despite rain in some parts of Western Queensland, drought declarations still cover 86 per cent of the state – that’s the largest extent of land in Queensland ever to be in drought at the same time. The City of Townsville’s potable water supply is extremely low with Ross River Dam presently at only 22%.

The high probability of a mass bleaching of the Great Barrier Reef this summer has been downgraded though it remains at risk of our warming climate (read more here Great Barrier Reef coral bleaching: too soon for optimism), and whilst, COTS (crown-of-thorns starfish) pose a significant immediate threat, right now, parts of the Great Barrier Reef off Townsville are a delight, and looking amazing having enjoyed 5 years of recovery post Cyclone Yasi.. snorkelling, diving, boating, get out there and enjoy it! Photo above is Lodestone Reef off Townsville on Valentine’s Day. 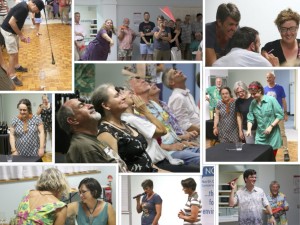 Behind the scenes, our transition to Nationbuilder is complete with a range of functions now able to be processed online. Thinking of donating or becoming a member – visit Support NQCC on our website and donate and/or become a member online!

NQCC has recently rationalised its use of space at its Queenslander housed office at 114 Boundary Street, Railway Estate, and is looking for a like-minded organisation to share the space. One room plus use of board room, meeting room, kitchen, bathroom, storage and yard, including electricity and NBN. Rent negotiable. If you are interested please contact NQCC.

Carmichael Mine
Yes, our State government followed the Federal Minister for Environment’s example by approving Adani’s coal mine (just weeks after world leaders in Paris agreed that the world had to reduce carbon emissions hugely and quickly) – but try and find someone who believes that the mine will actually go ahead given the current and likely future for fossil fuels! A recent statement from Tim Buckley, International Energy Economics and Finance Analysis, reads ‘I heard [Indian Minister of State with Independent Charge for Power, Coal, New and Renewable Energy] Minister Goyal speak today for 20 minutes in a Sydney-based government energy sector briefing. Goyal talked about micro-grids, offgrid battery storage, solar agricultural pumps, energy and grid efficiency, LEDs, street lighting, utility scale and rooftop solar power and cost effective economic development…. He talked about leapfrogging old world technology investments and building a sustainable modern electricity sector that will limit India’s carbon emissions and helps deal with climate change. The one word clearly absent from his entire vision was “coal” – in fact he never mentioned coal.’

Of course, now is not the time to stop calling for renewables, rather than fossil fuels. NQCC will continue to push for clean energy. For information on a possible transition route, check out Jobs After Coal: A Just Transition for Queensland prepared for Queensland Conservation Council and 350.org

Ironically, even Adani is ‘going solar’. They recently announced an interest in joining companies from Canada, China and Europe in developing solar projects in Australia, where large-scale solar in the country is forecast to experience a 15-fold increase in capacity by 2021, according to Bloomberg New Energy Finance. Back in Karnataka, India, Adani is committing US$1bn to build a new 1,000MW solar project.

According to Tim Buckley, ‘This also highlights that the Adani Group continues to leverage its strategic, operational and political strengths in India, making the prospects of investing a further $10bn in the Australian Galilee increasingly remote, particularly given the parlous state of the coal mining and associated infrastructure sectors globally. Financial institutions will be very wary of backing yet another coal project when the financial markets forward price for Australian benchmark 6,000kcal thermal coal is down to US$43/t through to 2022. Adani’s Carmichael coal is low energy, high ash – the exact type of coal India is now producing to excess.’

Contaminated dust deposition
The Port Stakeholders’ Working Group, established in response to NQCC’s report into Contaminated Dust in inner Townsville, will be one year old next month. Charlie McColl and Wendy Tubman currently represent NQCC and are joined by representatives of the port users, port management, the Departments of Environment, Science and Health, TCC and four community representatives. The reports of the meetings can be found on NQCC’s website. NQCC and EHP have asked independent Group chair David Donohue to coordinate a report on the first year’s achievements and plans for future improvements. While progress may be slow, NQCC representatives believe that the commitment of the participants is solid and that improvements will continue to be seen.

Water issues
NQCC members David Cassells and Charlie McColl and Board Member Frances Nelligan represent North Queensland Conservation Council on the Upper Burdekin Water Consultation Group, which is looking at a Ministerial proposal to amend the Water Resources (Burdekin) Plan 2007. The amendment will ‘focus on the sub-catchments upstream of Burdekin Falls Dam – the Upper Burdekin, Cape-Campaspe and Belyando-Suttor – to provide greater security for existing water users while allowing for future expansion in water markets. Certainty for water users is particularly important given emerging water demands from the irrigated agriculture and resources sectors’. Our representatives will be going in to ensure that the environment is not overlooked in any change.

A GLOBAL agreement on climate change – Paris, December 2015
According to the Climate Council, ‘The agreement is far from perfect – these things never are – but it is so, so much better than any of us thought it would be.’

The first nation to respond at the conference following the signing was the South African delegation. They picked a quote from their own Nelson Mandela that really summed up the moment and is well placed advice for all. ‘I have walked that long road to freedom. I have tried not to falter; I have made missteps along the way. But I have discovered the secret that after climbing a great hill, one only finds that there are many more hills to climb. I have taken a moment here to rest, to steal a view of the glorious vista that surrounds me, to look back on the distance I have come. But I can only rest for a moment, for with freedom come responsibilities, and I dare not linger, for my long walk is not ended.’

For various perspectives on the Paris Agreement…
The Climate Council have produced a video that explains simply what happened in Paris and what’s next. Video: “From Paris – we have a global climate agreement.”

Whilst lawyer and NQCC representative to EDO NQ, Rebecca Smith has written her appraisal of the Paris Agreement, “All Hot Air – Squandered opportunity in Paris”.

Divestment – Westpac commitment; Market Forces – ‘Burned’ report; improved SuperSwitch
The Westpac Group, a recognised leader in the Dow Jones Sustainability Index announced to its shareholders at its 11 December 2015 Annual General Meeting, ‘Westpac is committed to operating, both directly and indirectly, in a manner consistent with supporting an economy that limits global warming to less than two degrees.’ The announcement means that the funding of new coal or oil projects by Westpac would be unlikely to align within their strengthened climate stance.

To find out whether your superfund is investing your retirement savings in companies that damage the environment and climate visit MarketForces’ recently revamped SuperSwitch website.

This year’s Earth Hour has the theme Shine a light on Climate Action and will promote the tag #ChangeClimateChange. Save the Date: Saturday 19 March at 8:30pm. To get involved, check out WWF’s Earth Hour event hosting kit and tips for Celebrating Earth Hour.

The WWF EarthHour team is currently filming/editing a documentary that Channel 10 have agreed to air at prime time on the night of Earth Hour. They are seeking crowd-funding to complete the filming and editing.

Turning clicktivists into real-world activists
Featured in the Australian Financial Review on 4 February 2016, this article is interesting reading for people campaigning for change. Amongst a bevvy of valuable insights was this paragraph: ’In the landscape of progressive organising one doesn’t talk about capitalism versus socialism, or left and right, but of new power versus old power. The characteristic of new power is that it is diffuse, participatory, non-hierarchical. It is people doing it for themselves rather than being told what to do. It is crowdfunding, Uber, Twitter, Facebook, Airbnb. It’s about living lives outside the strictures and limitations imposed by the old-power institutions – banks, governments and churches. Heady stuff! It is the way social media works as well – not defying authority but ignoring it.’

19 February – Opening of “La Calavera Catrina” (the elegant skull) – Against a background of drought, local hairdresser come artist Sandy Nielsen responded to the grim reality of drought (her partner has a drought stricken property near Ravenswood) with something of beauty. An exhibition of livestock skulls that have been transformed into beautiful intricate artworks. At the Drill Hall Studio until 17 March. Fundraiser for Western Queensland Drought Appeal.

March 2016 – The Supplementary Environmental Impact Statement (SEIS) for the proposed Port expansion will finally (almost three years after comments closed on the EIS – see NQCC comments here) be released for public comment next month. NQCC will be making a submission and helping community members wishing to comment.