Some of you know me as the political independent anti-Adani candidate for Townsville, others as a teacher and artist, but for those of you who do not know me, I am a passionate advocate for the future of this planet. As always the continuous assault on the environment means that organisations such as NQCC have our work cut out for us trying to hold back the tide, whether the destruction of marine or land based habitats or the major issue of our time - addressing the causes of climate change.

As an organisation we welcome our new campaigns manager Tarquin Moon who is an environmental campaigner who previously worked at the Wilderness Society in Brisbane. Tarquin very kindly relocated her family to work for the NQCC and brings expert knowledge and dedication.

NQCC has been guaranteed funding for a further five years and while we prepare for our yearly audit and annual report we have achieved a number of great outcomes this year.

There have been several changes as NQCC, welcoming back some previous committee members and saying farewell and thank you to others. Wendy Tubman has recently stepped down from the Committee, as has Heather Laurie. We thank them for all they have contributed to NQCC over many years with Wendy as Coordinator and President and Heather as Treasurer and Secretary.

Wendy is organising the NENQ conference, which should be a huge success.  Joanne Keune was contracted to fund raise and did a great job organising the movie nights and the education hub at the Townville City Council Eco Fiesta. The feedback from these events was very positive and I thank Tarquin and Jo for all their hard work.  A big thank you to Wendy for all the advocacy and submissions in stopping the dredging and spoil dumping, it seems to have paid off. Our organisation relies on the goodwill, support and work of many people who have volunteered time and effort to keep it going for over forty years; we all have a common commitment to the environment.

Thanks to Recent Helping Hands

Our Management Committee is grateful for the able assistance on IT from Lawrence Owen and financial advice from Jenny Sebba, a former Treasurer for NQCC.  For now, the organisation is focused on important work ahead, namely the NQCC AGM in September, the end of year Trivia Night, membership renewals and of course the environmental campaigns - that we are all so passionate about!

Thank you to those who have renewed your membership for the 2018/19 financial year.  We invite others to become a member, go here on our website to pay just $20 for a year of membership.  Adding your voice to the call as a member of NQCC helps us in our work to challenge the Adani Coal mine from going ahead and to help improve water quality issues in the Great Barrier Reef.   We also welcome any additional (tax deductible) donations or regular monthly donations that you may wish to make, to help our cause, visit here.  It is people power and your support that has helped NQCC reach its 43rd year of environmental campaigning!

I would like to say hello to the fantastic, passionate members and supporters of NQCC.  I met a few of you in my first week at NQCC, at the ‘Our water, Our Lifeblood Regional Roadshow’ event on the 13th of April. This event focused on the shocking impacts to our region’s water resources of Adani’s mine, Clive Palmer’s mine and the further seven projects to dig up coal in the Galilee Basin. It’s been a busy few months and some of the activities where I was involved include: 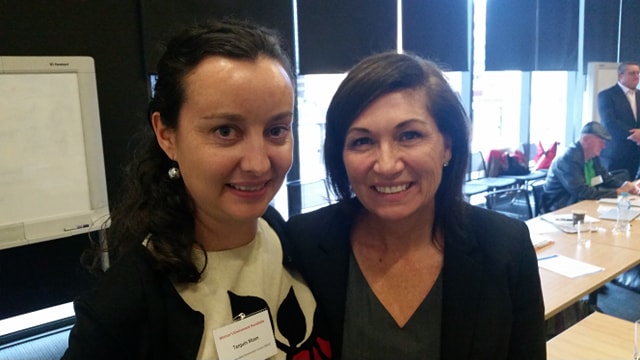 I would like to invite your input into the LMAC process as this is the mechanism for 2-way consultation between GBRMPA and the wider community.  The next meeting is on the 26th July and I welcome any items that you would like raised.  At the upcoming Annual General Meeting in September, I look forward to meeting you along with the many passionate NQCC members.  Also, I would like to put a call out for assistance from experts in Australia’s faunal extinction crisis, I have a submission due on 13th August.

NQCC coordinated the speakers program at Townsville’s 2018 Eco Fiesta held on Sunday 3rd of June, just before World Environment Day.  Joanne Keune was the vibrant, enthusiastic MC for the stage at the Education Hub, which featured succinct 15-minute talks about the environment.  A range of local people were able to showcase their projects from turtle conservation, to human health aspects of the environment to the Boomerang Bag’s mission to turn used fabrics into reusable bags.  Thanks to all the speakers for their time and we hope to be part of a bigger and better environmental speakers program next year! 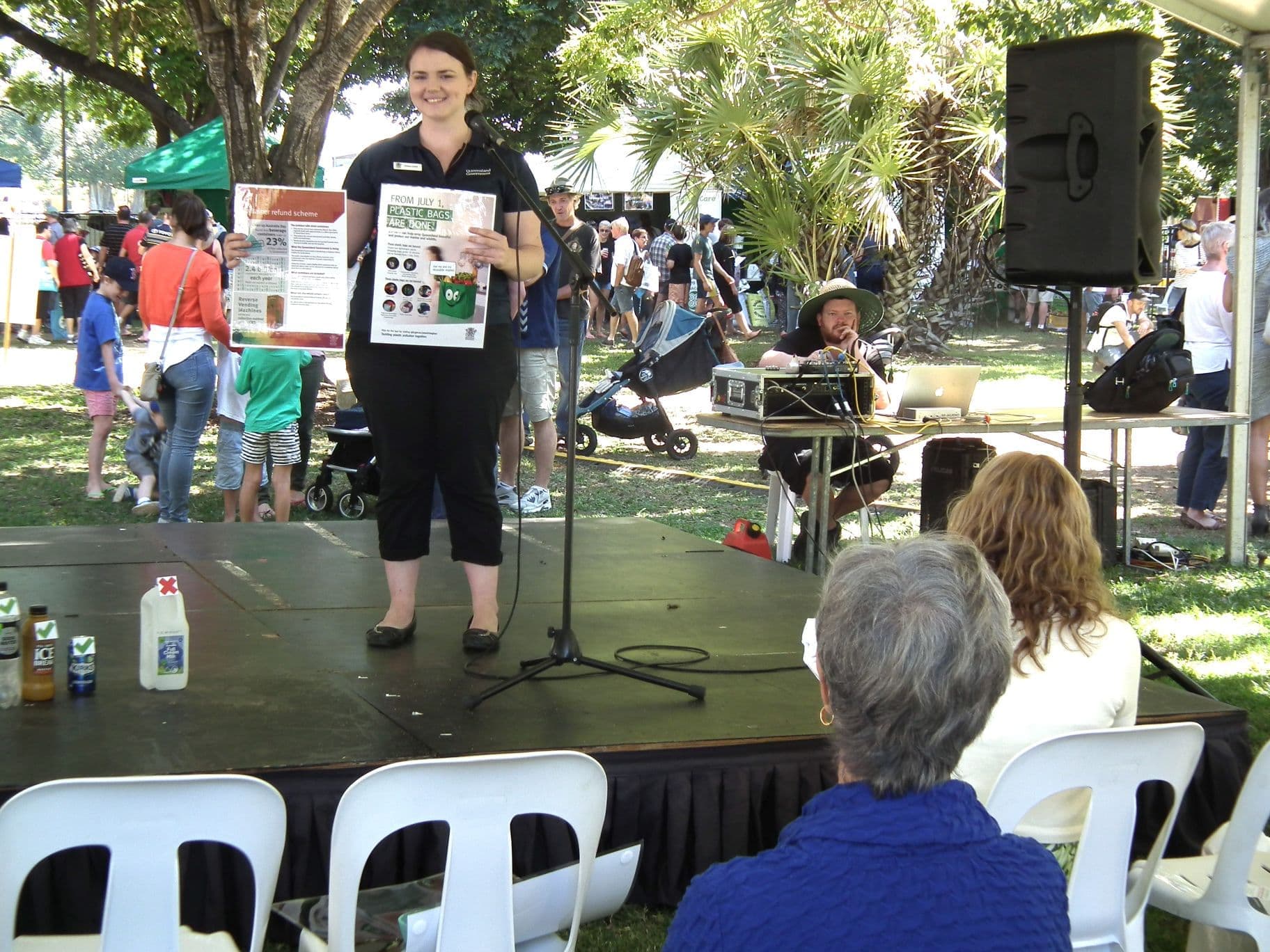 NQCC contributed to the Parliamentary debate over the Vegetation Management and Other Legislation Amendment Act 2018 (Qld) in Townsville on the 27th March.  This Amendment was passed late on Thursday, 3 May 2018 leading to significant changes to the Vegetation Management Act 1999 (VMA). Under the revised VMA, permits to clear native vegetation for cropping or irrigated agriculture can no longer be obtained, with these activities losing their ‘relevant purpose’ status. Permits for clearing of category C (high-value regrowth areas) or category R (regrowth within 50m of a watercourse or drainage feature within Great Barrier Reef catchments) vegetation types will also no longer be issued. The amendments have also led to the expansion of category R vegetation to incorporate all Great Barrier Reef catchments (with the addition of Burnett-Mary, Eastern Cape York and Fitzroy catchments).

The first of three fundraiser movie series was held on 13th March for ‘Sweet Country’ and it was a lovely night out. Guests were treated to some live didgeridoo music before the movie and some very engaging dialogue with some prominent local First Australians including Gail Mabo and Gracelyn Smallwood, who discussed some of the themes and issues highlighted in the film.  A further two movies were shown as part of NQCC’s movie series.  People enjoyed the pre-movie drinks and nibblies and the Events Cinemas were very supportive. 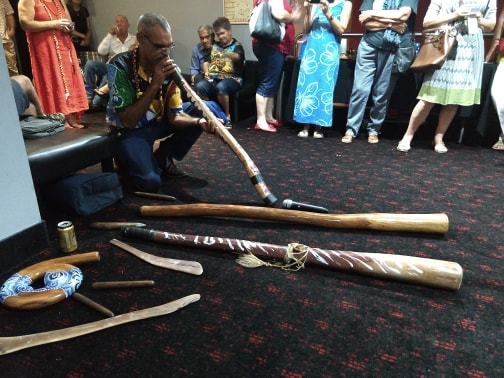 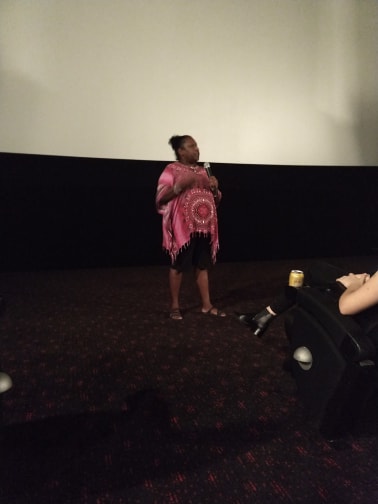 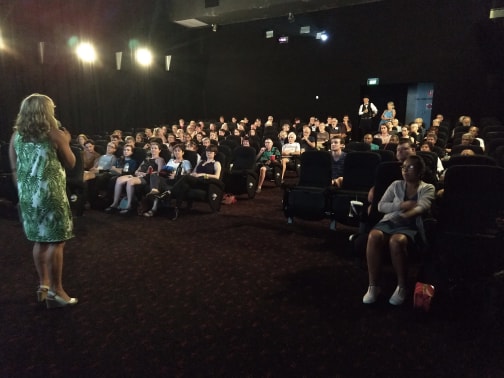 Photos from our "Sweet Country" movie night - live didgeridoo performance, a talk by Gail Mabo, and Joanne Keune with the audience

Calling for Art works for next year’s Postcard Art show

NQCC would like to invite anyone who would like to submit a postcard sized artwork for our fundraiser event next year.  The works will be up for auction and displayed in the Vault in the Umbrella Studio. Artworks are due by the end of this year - more details to follow.

Expanded public mooring and reef protection program - Queensland Parks and Wildlife Service (QPWS) has $2.375M funding over 2016-19 to invest in this program within the GBR, community feedback invited until 31st July

North Queensland Bulk Ports (NQBP) dredging proposal -  Call for comments on NQBP’s maintenance dredging proposal, including disposal of dredge material in the Marine Park for the Port of Hay Point, comments to be lodged by 21st August

‘Myrtle Rust in Australia – a draft Action Plan’ is now published in PDF format at www.apbsf.org.au. This document is open for public comment until 31 August 2018

If you are able to assist NQCC with making submissions or you would like further details about these matters for public comment, email us at [email protected]

See "Our People" for introductions to Tarquin and our current committee.

Other groups' updates and events

On a brilliantly sunny day in May, members of NQCC, GetUp and Australian Youth Climate Coalition got together for the Townsville Solar Tour.  With over 40 people in tow, we visited the Sun Metals and Ross River solar farms and saw first-hand the private-sector renewable energy boom happening right in our own backyard. We learnt about the bright side of the boom and how it's delivering jobs and cheaper, cleaner power, but also about how local, state and federal governments have a key role to play to make sure the benefits are felt by the people of Townsville.  It's an exciting time to join #Repower Townsville campaign to make Townsville the Clean Energy Capital of Australia! You can sign up here to get involved. 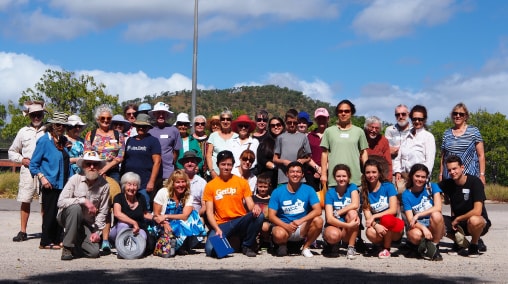 On the last weekend of May, Nick Carter left the chill of Brisbane behind to engage with some young individuals interested in local and national climate change action. Representing AYCC (the Australian Youth Climate Coalition), Nick hosted a meetup for interested young locals, which was educational, motivational and a great networking opportunity. A second meeting, hosted by Csilla Peto, was held at NQCC’s office earlier this week, and the group appears to be gaining local interest and momentum. NQCC looks forward to supporting the youth movement against climate change in North Queensland. If you are under the age of thirty and want to see what you can offer, find AYCC Queensland online or on Facebook.

Groups from all over Australia held Red Line Campaign actions on Saturday 30 June, in an effort to draw a line that there should not be any more new coal mines in Australia.  The Stop Adani Townsville group had an action on the Strand and a snap action was organised for McClelland’s Lookout at Paluma. 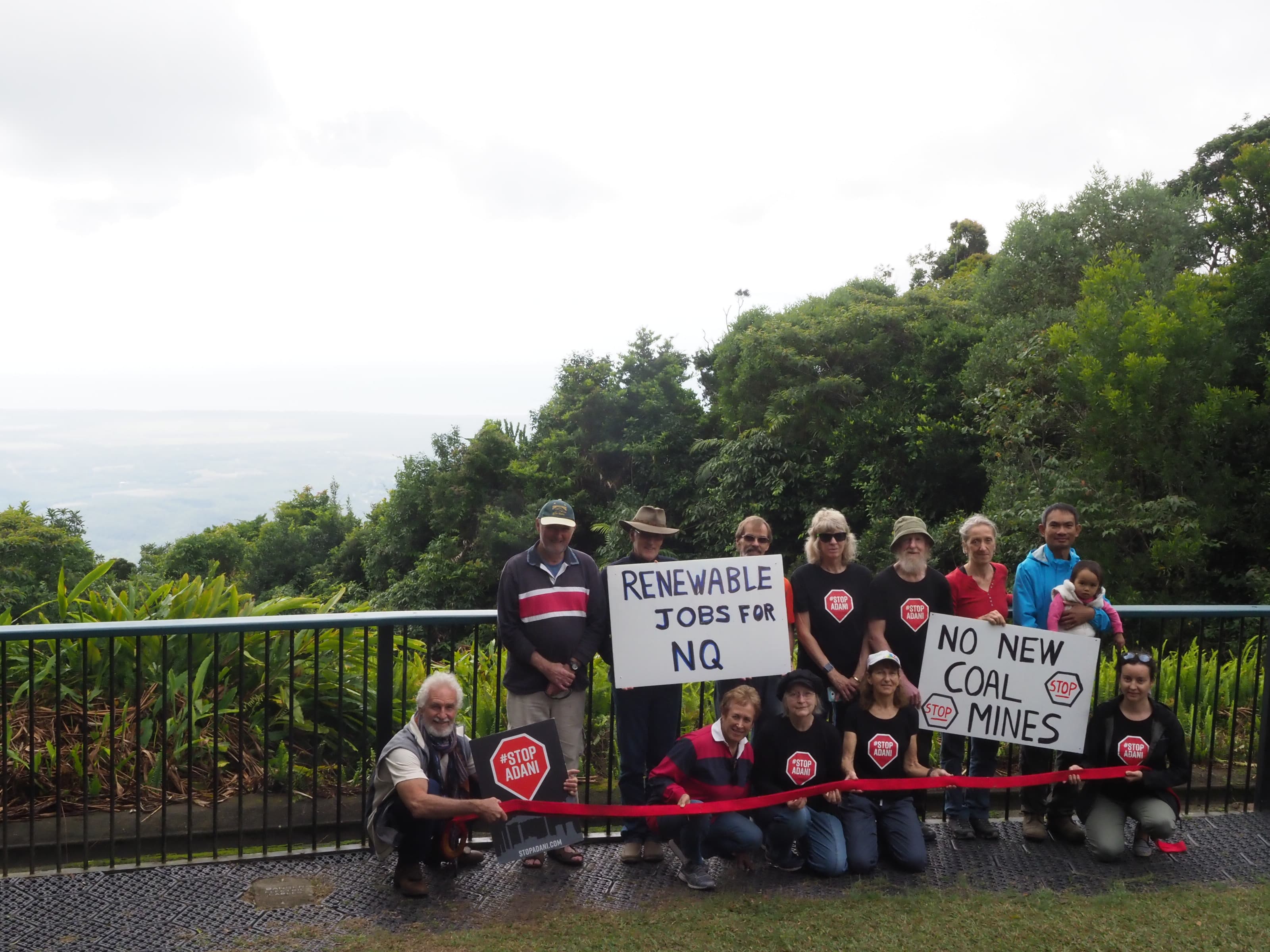