Welcome to the June edition of Paperbark. With an election approaching, there has been a flurry of activity at the NQCC office. In this issue: AMCS – membership – Election forums for Herbert and Dawson – Great Barrier Beer – Wendy’s launch party – Golf course watering – Letters to the Bulletin – Vegetation Management – Election scorecards – Cash for containers – National Parks win – Emu research

We are sharing our office space until the election with a community campaigner from Australian Marine Conservation Society, Tamara Parr. The focus of this campaign is to remind voters in Dawson electorate about the Reef when they head to the ballot box this July. If you’d like to be involved in a phone call campaign to voters, please email Tamara.

NQCC membership is now due

We rely on members’ support to continue our activities advocating for environmental protection. Your $20 membership is valid until 5 June 2017, and allows you to be involved in the direction of NQCC at our AGM. Click here to renew or sign up for membership.

Thank you to the near 50 members who have already paid, and thank you to some very generous donors. Your contribution is very much appreciated. 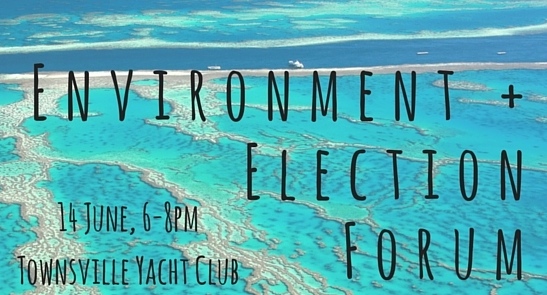 WHEN: Tuesday 14 June, 6-8 pm
WHERE: Townsville Yacht Club, 1 Plume Street Townsville
WHAT: As usual, NQCC is hosting a pre-election forum for candidates to speak about their environment policy, as well as for the public to question our potential leaders about what issues matter to us. Ms Lorna Hempstead AM will be chairing the forum. This event is free and all are welcome.

For the NQCC supporters falling within the Dawson electorate, you have a candidates forum too! Dr. Paul Marshall will be the guest speaker and facilitator.

WHEN: Friday 17 June, 5:30-8:30 pm
WHERE: Heritage Exchange Hotel, 151 Flinders Street Townsville
WHAT: Free beer. Do I need to say more? Well, the Good Beer Co. is launching their Great Barrier Beer in Townsville, which you’ll find being stocked around bars and pubs. At least 50% of the profits from the beer will go to the Australian Marine Conservation Society. This event is free but you should RSVP here.

WHEN: Tuesday 28 June, 1pm
WHERE: Dan Gleeson Meeting Room, 86 Thuringowa Drive Townsville
WHAT: The Townsville Council will be making a decision about the use of potable drinking water at the local golf course, at a discounted rate during the time of drought. You can sign this petition to show your support, or come along in solidarity. Further information available here.

I’ve been writing frequently to the Townsville Bulletin to make sure the voice of the environment is heard in public discussions, and I’ve noticed some familiar NQCC names doing so too! Thank you to our members and supporters who have sent in a letter to the editor. And please keep doing it!

If you want to keep up to date with our media releases, click here. 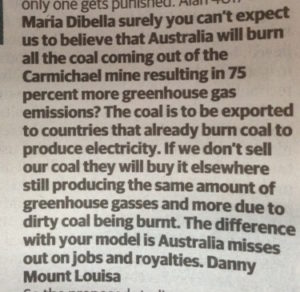 Here is a response my ‘no public money for Adani’ letter received – an interesting point the author raised, considering that the  GVK Hancock Alpha mine project also within the Galilee Basin was taken to the Queensland Court of Appeal by Coast and Country over a ‘substitution argument’. That is, that the impact of burning fossil fuels should not be disregarded because of other mines that may cause similar impacts if the project is refused. If the case is won, an important precedent will be set as to how coal projects are assessed in Queensland. Read more: ABC News, Brisbane Times, media release from Environmental Defenders Office.

On 18 May I represented NQCC as a witness at the Parliamentary Committee public hearing. The room was filled with anti-Bill supporters but I hammered home the messages that tree clearing laws need to be tightened to reduce the loss of biodiversity, to reduce sediment run off into the Reef catchments, and to keep trees in the ground to sequester carbon dioxide and help reduce Queensland’s emissions. The full transcript is here, and the question on notice I responded to after the event is here.

Lots of organisations that NQCC supports are releasing their scorecards for the upcoming election.

Fight for the Reef, a campaign run by Australian Marine Conservation Society and WWF, has put out their draft scorecard, rating parties on their policies that affect the Reef. See the scorecard.

Solar Citizens have also released ratings, based on the support for renewable energy, and asking all candidates and parties to commit to 100% renewable electricity by 2030. See the Herbert electorate scorecard, or find a different electorate.

Also, there is a scorecard by the Australian Conservation Foundation, supporting three policy asks of supporting clean energy, cutting pollution, and protecting our reef, rivers, forests and wildlife. See the scorecard.

Cash for Containers in Queensland

There is now bipartisan support for the Container Deposit System. This program would implement a 10 cent refund for drink bottles and cans, a significant action to buffer the problem of litter, stop plastic polluting the oceans and harming sea life, and to increase recycling. The Boomerang Alliance anticipates the program could be rolled out in 2018.

On 11 May, the Queensland government reinstated nature conservation as the primary goal of national park management. In 2013 and 2014 changes were made that broadened and downgraded the protected area concept. Competing interests, such as commercial, recreation or social, were placed within the Nature Conservation Act as being on par with nature conservation. Now there is also a legal requirement that there must be community consultation as part of each park’s individual management plans. You can read Minister Steven Miles’ statement here.

Do you have Emu feathers?

A researcher from Western Sydney University is collecting a large sample size of Emus across Eastern Australia to analyse variation in diet and genetics. If you find feathers in the bush or at roadkill sites, they would be very useful for this project. More information about the project in Emu feather collection flyer.

That’s all for this month. If you have an idea for next month’s Paperbark, or know about an important local issue NQCC should be involved in, please get in touch. Email NQCC or call 0428 987 535.